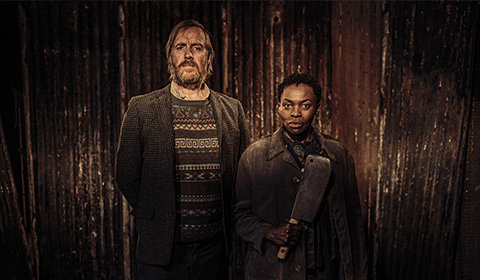 Royal Court Theatre
10 seat views
Prolific writer, director and producer Ed Thomas returns to the Royal Court this October with On Bear Ridge, a semi-autobiographical story of places left behind.

Bear Ridge is a village lost to redrawn border and redesigned maps, but the stalwart Bear Ridge Stores still stands. Silent after a hundred years of trade, the butchers, grocers, petrol pump, and everything in between have been abandoned – but not by owners John Daniel and Noni. But as they reminisce about old times and the old language, drinking the last of the whiskey as they do so, a figure is making their way towards them through the dark night.

Rhys Ifans stars as John Daniel. His previous theatre credits include Exit the King at the National Theatre and King Lear at the Old Vic Theatre. A prolific television and film actor, he won a BAFTA for his performance in Not Only But Always.
He is joined by Rakie Ayola as Noni; she has previously appeared on stage as Hermione Granger in Harry Potter and the Cursed Child and Breath at the Royal Court.

Ed Thomas is an award-winning writer, both for theatre and screen. Best known for co-creating acclaimed television drama Hinterland, he is also a prolific producer of Welsh-language television. His plays include House of America and Gas Station Angel, which premiered at the Royal Court, and many have toured across the UK, Europe and Australia, and have been translated into more than 10 languages.

The play will be co-directed by Thomas alongside Royal Court Artistic Director Vicky Featherstone, a champion of new writing whose work with the Royal Court since her appointment in 2013 has been widely acclaimed.

Ed Thomas’ semi-autobiographical story about abandoned places and the indelible marks they make on us opens at the Royal Court on 24 October 2019.

Special notice: Fans of Ed Thomas’s acclaimed drama Hinterland should be sure to catch his latest work on stage, and anyone wanting to experience the essence of the Royal Court through the direction of it’s artistic director won’t want to miss out on this prime opportunity.

Sorry this show closed 23 November 2019, we recommend these similar productions.

On Bear Ridge seat view photos show what view you will get for your money. Unfortunately we do not have any seat views for this show.