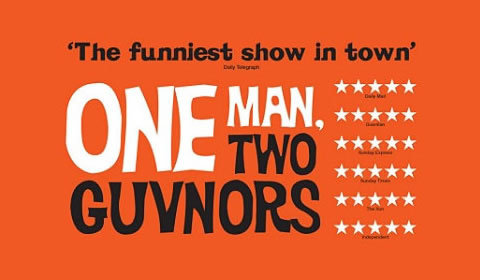 Theatre Royal Haymarket
9 seat views
Richard Bean’s smash-hit comedy One Man, Two Guvnors transfers to the Theatre Royal Haymarket, following two hugely successful runs at the National Theatre and Adelphi Theatre. Adapted from Carlo Goldoni’s Servant of Two Masters, One Man, Two Guvnors is the tale of ever-hungry Francis Henshall and his struggle to keep his two employers from discovering each other.

Directed by Nicholas Hytner (The History Boys), One Man, Two Guvnors is the hysterical story that follows down-on-his-luck Francis, who is fired from his skiffle band and gets two brand new jobs instead. Transported to 1960’s Brighton, we follow Francis as he becomes employed by petty criminal Rosco Crabbe and also Stanley Stubbers, a slightly nobler criminal. But soon it is discovered that Rosco Crabbe is actually Rachel Crabbe in disguise, with Rosco having been killed by Stanley Stubbers… That’s when things really start to get complicated!

Premiering in 2011 at the National Theatre, One Man, Two Guvnors starred James Corden as Francis, who later transferred with the production to the West End’s Adelphi Theatre. Now, his first cover Owain Arthur is set to take on the title role of Francis Henshall, with further casting including Ben Mansfield as Stanley Stubbers, Tom Edden as Alfie, Gemma Whelan as Rachel Crabbe, Jodie Prenger as Dolly, Fred Ridgeway as Charlie Clench, Hannah Spearritt as Pauline Clench, Daniel Ings as Alan Dangle, Martyn Ellis as Harry Dangle, Trevor Laird as Lloyd Boateng and David Benson as Gareth.

Written by Richard Bean (The Mentalists, Great Britain), One Man, Two Guvnors features design by Mark Thompson, music by Grant Olding, sound design by Paul Arditti and lighting design by Mark Henderson. Hailed as the funniest play to have hit the West End for years, One Man, Two Guvnors is packed full of songs, satire, slapstick and uproarious laugh-out-loud moments, transferring to the Theatre Royal Haymarket in March 2012.

Special notice: Fans of James Corden will not be disappointed with this cast change, as Owain Arthur has been hailed as Corden’s equal! Those who enjoy crazy slapstick comedy will love this production, which has genuinely laugh-out-loud moments throughout! One Man, Two Guvnors is recommended for those aged 14 and up.

Sorry this show closed 01 March 2014, we recommend these similar productions.

SeatPlan Recommends: Good views are on offer throughout the Theatre Royal Haymarket, particularly in the mid-front of the Stalls. Be sure to sit here if you want the best view of the slapstick comedy!