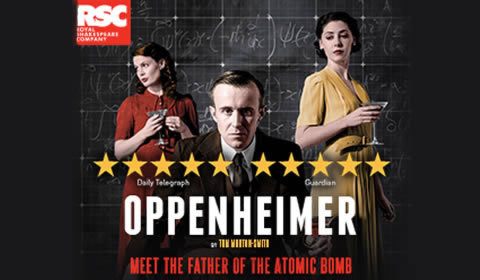 Set in 1939, fascism is rapidly spreading across Europe, Franco is marching on Barcelona and two German chemists are in the midst of discovering the processes of atomic fission. In Berkeley, California, theoretical physicists begin to recognise the horrendous potential of this potent science, which is easily able to spread catastrophic damage across the world. Soon, J. Robert Oppenheimer finds himself perfectly placed to spearhead the largest scientific undertaking in human history. Thrust into a position of power, Oppenheimer races to create a weapon so radical and devastating that it could bring an end to all wars.

Written by Morton-Smith (Salt Meets Wound, In Doggerland), Oppenheimer is directed by Angus Jackson, with design by Robert Innes Hopkins, lighting design by Paul Anderson, music by Grant Olding, sound by Christopher Shutt and movement from Scott Ambler. Transferring to the Vaudeville Theatre for a limited season beginning March 27th, don’t miss out on this highly acclaimed, thrilling new play.

Special notice: Those who missed Oppenheimer’s original run in Stratford-upon-Avon now have the opportunity to watch the drama on a West End stage. Fans of history, specifically World War Two, will find this drama hugely interesting, as it documents the “father of the atomic bomb”. Oppenheimer is not aimed at young children.

Sorry this show closed 23 May 2015, we recommend these similar productions.

SeatPlan Recommends: Seats in the Vaudeville Theatre are mixed, with seats in the higher tiers and those at the rear of the Stalls often being restricted. Best views of the stage can be found in the mid-front of the Dress Circle, as you are able to see the whole stage without restrictions.