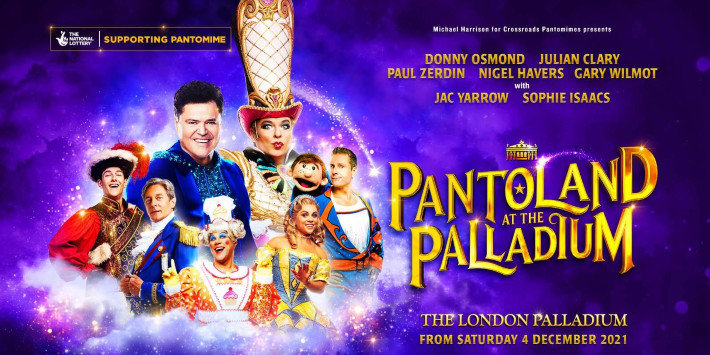 Pantoland at the Palladium tickets

Join the greatest entertainers on Earth

Pantoland will reunite some of the biggest stars of the previous Palladium pantomimes, including Nigel Havers, Gary Wilmot and Paul Zerdin, alongside the stars of Joseph and the Amazing Technicolour Dreamcoat and SIX the Musical, Jac Yarrow and Sophie Isaacs.

Presenting some of the most unforgettable moments of pantos gone by, Pantoland tickets will take audiences on a magical journey filled with huge laughs and show-stopping musical numbers presided over by the Wizard of Pantomime – played by the legendary Donny Osmond.

The perfect treat for the whole family, Pantoland at the London Palladium promises to be a star-filled extravaganza and the ultimate feel-good, festive show.

Age recommendation: No under 4s allowed

Pantoland at the Palladium tickets

Pantoland at the Palladium seat view photos show what view you will get for your money. Our users will start adding seat views when the show opens.