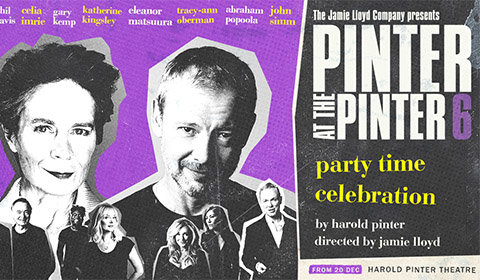 Harold Pinter Theatre
24 seat views
The Jamie Lloyd Company present a five-month-long Pinter at the Pinter Season, to commemorate the 10th anniversary of the death of the Nobel Prize-winning British writer, Harold Pinter. With star-studded casts, Jamie Lloyd joins together with some of the country’s leading creative teams to present a series of the playwright’s short works, including hilarious double-bill Party Time / Celebration.

Celebration is Pinter’s final play, and it is paired with the incredibly witty Party Time in this double-bill of satirical comedies that are a scathing attack on the wealthy and their warped priorities. With political undertones and plenty of digs at the vulgar materialism of the super-elite, these two plays are particularly relevant to modern day life.

Oberman most recently appeared on stage in Present Laughter at Chichester Festival Theatre, as well as in Stepping Out at the Vaudeville Theatre, whilst recent graduate Abraham Popoola last appeared on stage in Julius Caesar at the Bridge Theatre. Casting also includes John Simm, Gary Kemp, Ron Cook and Phil Davis.

This completely unique season runs at the Harold Pinter Theatre for a strictly limited season, from September 2018 to February 2019. A celebratory event that acknowledges some of Pinter’s lesser-known works and stages his finest short plays, Party Time / Celebration is the sixth double-bill to feature in the season. The production runs from 20 December 2018 to 26 January 2019, with a press night on 4 January 2019.

Age recommendation: No under 5s. Recommended 14+

Sorry this show closed 26 January 2019, we recommend these similar productions.

Party Time / Celebration seat view photos show what view you will get for your money. Unfortunately we do not have any seat views for this show.