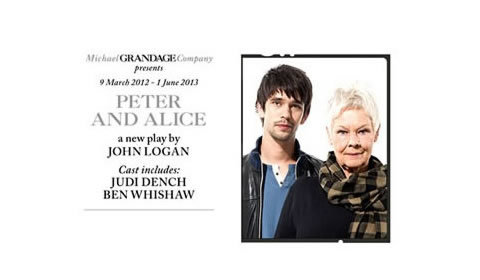 Noel Coward Theatre
0 seat views
Acclaimed screenwriter John Logan brings his daring new play to London’s Noel Coward Theatre, starring legendary actress Judi Dench opposite Ben Whishaw. Directed by Michael Grandage (Privates on Parade, The Cripple of Inishmaan), Peter and Alice is the fairy-tale Neverland meets Wonderland story about love, happiness and ageing, and how are childhoods unavoidably mould us into who we are today.

Set in 1932, eighty year old Alice Liddell Hargreaves meets thirty-five year old Peter Llewelyn Davies in a dusty bookshop at the opening of a Lewis Carroll exhibition. Both found fame thrust upon them as they were the original namesakes for children’s fictional favourites Alice in Wonderland and Peter Pan. Having both suffered emotional turmoil, the pair gradually reveal their childhoods piece by piece, describing past relationships and views on intimacies with authors Carroll and JM Barrie. As the past blurs into the present and light and dark become interchangeable, we catch a glimpse of the lives of the “real” Peter and Alice.

Judi Dench and Ben Whishaw star as Peter and Alice, reuniting after playing alongside each other in Skyfall, also written by John Logan. Dench has extensive theatrical credits to her name, including A Midsummer Night’s Dream, Hay Fever, Merry Wives of Windsor and All’s Well That Ends Well, with film credits including The Best Exotic Marigold Hotel, the James Bond series, Mrs Henderson Presents and an Academy Award-winning turn in Shakespeare in Love. Ben Whishaw has appeared in The Pride, Cock and The Seagull, as well as several screen credits including Cloud Atlas and Brideshead Revisited. Further cast members include Olly Alexander, Ruby Bentall, Stefano Braschi, Nicholas Farrell and Derek Riddell.

Peter and Alice is a new play by John Logan, an experienced playwright and screenwriter with credits including Skyfall, Gladiator, Sweeney Todd and The Last Samurai. In 2010, his play Red won six Tony Awards. Peter and Alice features design by Christopher Oram and sound designs and compositions by Adam Cork. An extraordinary exploration that blurs reality, memories and fantasy, Peter and Alice is a captivating new play starring two of Britain’s finest actors.

Special notice: This is a must-see for fans of Judi Dench and Ben Whishaw, who bring Logan’s story to life in a captivating way. Fans of the tales of Peter Pan and Alice in Wonderland will gain an insight into the real people behind the beloved characters.

Sorry this show closed 01 June 2013, we recommend these similar productions.

SeatPlan Recommends: Sit in the mid-front of the Stalls for the best view of this alternative play, or in the first few rows of the higher tiers. Bargain seats can be found in towards the rear of the Royal Circle and in the Grand Circle, where overall views of the stage are just as good.

Nobody has added a seat view photo for Peter and Alice at Noel Coward Theatre yet, please be the first to share your experience.
Your basket is empty.