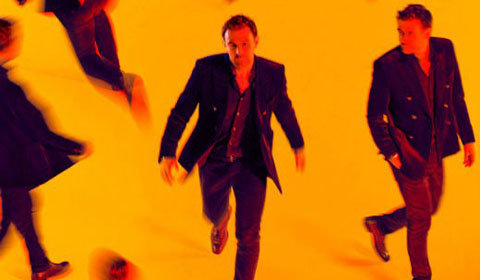 National Theatre - Olivier
20 seat views
After stunning audiences in Angels in America, James McArdle returns to the Olivier Theatre stage for Peter Gynt. A modern adaptation of Ibsen’s Peer Gynt, this outlandish but epic play is a co-production with Edinburgh International Festival.

Peter Gynt is an ordinary man who dreams of becoming more. In David Hare’s sharp and satirical re-imagining, Ibsen’s unruly antihero traverses the globe after stealing away a local bride. From the poolside heat of Florida to the dry deserts of Egypt, Gynt embarks on a remarkable journey of transformation populated by talking hyenas, two-headed trolls, and a final return to his Scottish homeland.

James McArdle won the 2015 Ian Charleson Award, First Prize, for Platonov and has since delivered bravura performances in the multi-award-winning revival of Angels in America and Ivanov. He most recently appeared in Mary Queen of Scots on screen.

Playwright David Hare has worked prolifically at the National Theatre, with recent credits including The Red Barn and I’m Not Running. A writer and director for screen and stage, he won the 2011 PEN Pinter Prize.

Transporting ancient Scandinavian parables to the modern day, Peter Gynt is a dazzling and wholly unique piece of theatre with a virtuoso central performance from McArdle. It runs at the Olivier Theatre from 16 August 2019.

Special notice: Anyone who loved McArdle’s tour-de-force performances in Angels in America or Platonov should snap up tickets for Peter Gynt.

Sorry this show closed 09 October 2019, we recommend these similar productions.

Peter Gynt seat view photos show what view you will get for your money. Unfortunately we do not have any seat views for this show.

An energetic show. This modern interpretation of an Ibsen work, sometimes considered arduous, kept the... More

An energetic show. This modern interpretation of an Ibsen work, sometimes considered arduous, kept the tempo high. James McArdle gave an emphatic performance that steered the show admirably through its many mythical twists and turns.

Peter Gynt, a name repeated so many times it starts to sound like a Shakespearian era insult, is a fascinatingly... More

Peter Gynt, a name repeated so many times it starts to sound like a Shakespearian era insult, is a fascinatingly strange play. Updated by David Hare from the original Ibsen, Peer Gynt, it retains the plot in its entirety as we follow a morally selfish man on his journey of self-discovery and fulfilment. This version is a three act play, reduced from the original five which is in some ways a mercy. That isn’t to say it’s bad - this latest National Theatre offering is perhaps best described as a play of three halves (although as a lifelong theatregoer I question my own credentials in using a sports metaphor). To begin with, ‘Peter Gynt’ is filled with sharp wit, Hare has expertly infused this classic with all manner of references to the 21st century in which it is reconceived – his characters comment on everything from the Iraq war to Netflix. The modern-day Peter becomes a voice for Hare’s irrepressible political discourse, with his rise to financial success mirroring a Rupert Murdoch-esque caricature, before his inadvertent comeback as a prophet sees him reimagined as a motivational speaker / influencer. The relevance of this, the story of a rich white man desperate to assert his own importance, bears no question in 2019. The hall of the mountain king is also reconceived with striking similarity to the infamous Bullingdon club, with little connection beyond the giants’ flagrant contempt for those outside their community or class; a little on the nose as comparisons go, but not unwelcome. The play also interjects songs with increasing frequency to accompany its more surrealist moments. These are unwelcome. In the leading role of Peter Gynt is James McArdle, heir apparent to Rory Kinnear in the National Theatre and a brilliantly comic actor who proves again in this goliath role his great capacity for desperate, unrelenting despair. McArdle is at his best in the play’s second act, in which the pattern of the comic descending starkly into the tragic becomes clearer and the events of his life continue to snowball out of Gynt’s control. This continues to the horrifying climax of this act which a classic Olivier Theatre coup de theatre which will surely give the audience nightmares. In the supporting cast, Oliver Ford Davies brings a welcome gravitas to his role in the third act as some arbiter of Gynt’s fate, while Guy Henry’s light-footed and high-spirited take on the devil is a scene-stealer and the only joy to be found in the play’s gloomy final hour. Embracing the failure of his existence and taking comfort in affection he has not earned from his inexplicably infatuated and woodenly portrayed paramour, the play ends on an uncertain note – a small lesson has been learned by the protagonist perhaps, but not by the creative team as the brilliant sense of theatricality and modern vitality they had found in the middle was lost at sea by the end. A puzzling afternoon.

A very bizarre show, which I knew barely anything about before seeing, but has a fantastic central performance... More

A very bizarre show, which I knew barely anything about before seeing, but has a fantastic central performance from James McArdle, some catchy enough songs and interesting staging. It is very long though but if you want to see something very unusual and different, this is definitely worth a watch.

I came back to see the show for the second time, for a personal interest in Ibsen's dramaturgy: this... More

I came back to see the show for the second time, for a personal interest in Ibsen's dramaturgy: this is an interesting and energetic version of Ibsen's Peer Gynt.