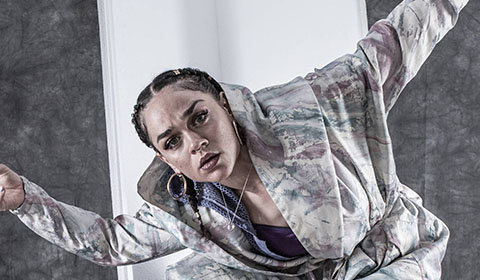 In Stevenson’s semi-autobiographical piece, a girl living in a strict Mormon household somewhere just between East London and Essex is given Dizzee Rascal’s ground-breaking grime album Boy in da Corner by her best friend SS Vyper. Precisely 57 minutes and 21 seconds later, she begins to change – her dyslexia left her feeling muted, her sexuality was conflicted, and her loneliness was overwhelming, but this music allows her to spit powerful words, feel free to explore and feel appreciated by her closest friend.

Debris Stevenson is a dyslexic writer, Grime poet, working-class academic, pansexual ex-Mormon and social activist – unsurprisingly, she feels compelled to explore the intersectional, unjust and unexpected. At the age of eighteen, she organised and hosted Turning Points Festival and has since founded Mouthy Poets, an organisation teaching thousands of young people poetry as a life skill; through this, she has raised over £300,000 to develop young artists.

Step into a world where music, dance and spoken word collide in Debris Stevenson’s story of how grime allowed her to redefine herself - Poet in da Corner runs at the Royal Court from 30 January 2020.

Special notice: Any grime fans should jump at the chance to see the musical genre explored on stage, as should anyone interested in experiencing a ground-breaking and genre-blending new piece of theatre.

Sorry this show closed 22 February 2020, we recommend these similar productions.

Poet in da Corner seat view photos show what view you will get for your money. Unfortunately we do not have any seat views for this show.

This was a clever show. If you don't like rap then avoid otherwise submerge yourself in the autobiographical... More

This was a clever show. If you don't like rap then avoid otherwise submerge yourself in the autobiographical story of a woman moved by a Dizzie Rascal album. Superb