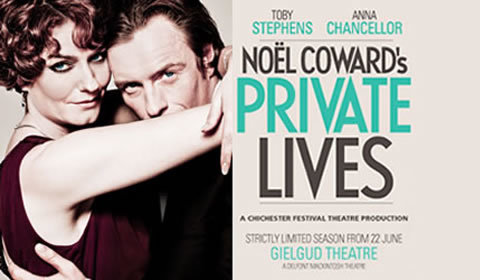 First performed in 1930, Kent’s revival of Private Lives proves that Coward still has the power to thrill, shock and delight audiences in the 21st century. Following rich divorced couple Elyot Chase and Amanda Prynne, the two reignite their love for each other when they are unexpectedly booked in to adjoining suites of a Riviera hotel, five years on from their last meeting. The only problem is, they are both booked in on their honeymoons with their respective new partners! After their chance encounter brings back the passion they once felt for each other, they fling themselves into a whirlwind romance, with no regard for their partners’ turbulent pasts.

Toby Stephens stars as Elyot, with his numerous theatre credits include Danton’s Death, The Real Thing, A Doll’s House and A Streetcar Named Desire. Stephens is also well-known for his villainous role in Die Another Day. Anna Chancellor also stars as Amanda, with previous credits including South Downs and The Browning Version, which both transferred from Chichester to the West End. They are joined by Anthony Calf (Death and the Maiden) as Victor Prynne and Anna-Louise Plowman as Sibyl Chase.

Special notice: Fans of Noel Coward will enjoy seeing one of his most acclaimed plays come to London. Due to adult content, Private Lives may not be suitable for young children. Recommended for those who enjoy romantic dramas, with a good dose of comedy.