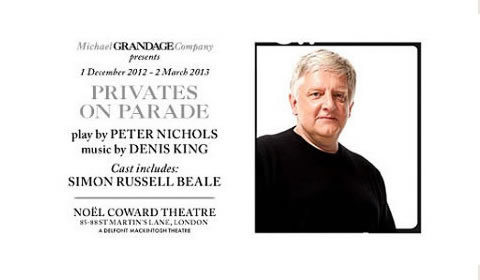 Noel Coward Theatre
0 seat views
Simon Russell Beale plays the cross-dressing Captain Dennis in Peter Nichols’ award-winning comedy Privates on Parade. Kicking off Michael Grandage’s five-show residency at the Noel Coward Theatre, Privates on Parade is the riotously fun play set during the end of the Second World War. Originally premiering in 1978, the play became an international hit, and now opens at the Noel Coward for a run beginning in December.

When Private Steven Flowers is posted to the Song and Dance Unit in South East Asia, he is not quite sure what to expect. But as he serves under the flamboyant Captain Terri Dennis, he begins to discover that it might take more than just a uniform to become a real man. Set against the murderous backdrop of the fierce Malaysian campaign at the end of World War Two, Privates on Parade deals with the serious side of sexual and racial politics.

Written by Peter Nichols, Privates on Parade is legendary director Michael Grandage’s first play in an upcoming season of five at the Noel Coward. Privates on Parade features design by Christopher Oram, lighting design by Paule Constable, sound design by Nick Lidster and Terry Jardine (for Autograph), music by Denis King and choreography by Ben Wright. A ridiculously hilarious performance from Russell Beale, this play is simply not to be missed!

Special notice: Fans of Simon Russell Beale will enjoy seeing him flaunt his flamboyant side in this production. Privates on Parade is perfect for anyone looking for a good giggle!

Sorry this show closed 02 March 2013, we recommend these similar productions.

SeatPlan Recommends: Sit in the middle of the Stalls or front of the Royal Circle for the best overall views of the stage. Be aware that some bargains can be found towards the ends of the rows.