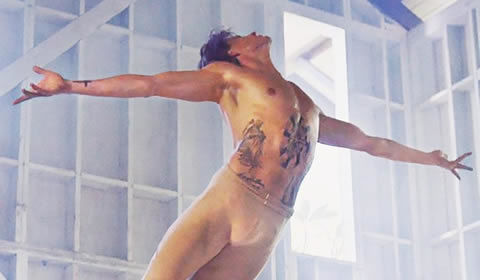 Project Polunin is Sergei’s newest venture, which sees him collaborate with an international cast and creative team to bring contemporary works to the stage. Combining dancers, artists, musicians and choreographers from around the globe, the production strives to nurture and support people in the dance industry, inspiring them to become more creative.

Sergei Polunin is one of the world’s most famous ballet dancers, originally becoming a Principal at the Royal Ballet at the record-breaking young age of 19. After four years with the company, he performed with the Stanislavsky Theatre, Novosibirsk Opera and Ballet Theatre in Russia, before appearing in David LaChapelle’s music video version of Hozier’s popular song “Take Me to Church”.

Following a successful run at Sadler’s Wells last year, Project Polunin promises to be a spectacular evening of dance, featuring exemplary talent from around the world. Brought to the stage by one of ballet’s best dancers, the show aims to create new dance and ballet works for both stage and screen. Playing a strictly limited run at the London Coliseum, the production plays from December 5th to 10th 2017.

Special notice: Fans of dance will be enthralled by this spectacular production, which features the legendary ballet dancer himself. Those who enjoy productions at the Sadler’s Wells will enjoy seeing this on the large London Coliseum stage.

Sorry this show closed 10 December 2017, we recommend these similar productions.

SeatPlan Recommends: Sit in the mid-Stalls or in the front of the Dress Circle for the best overall views of the stage, particularly for a dance production. Seats at the front of the Upper Circle also offer a good view, although avoid the Balcony as a lot of detail could be missed.