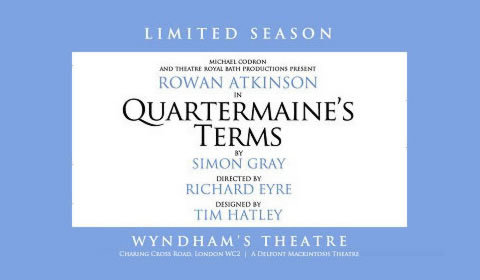 Wyndham's Theatre
0 seat views
Legendary actor Rowan Atkinson stars in Richard Eyre’s touching West End revival of Simon Gray’s classic Quartermaine’s Terms. First staged in 1981, this charming English drama takes a poignant look at human relationships and the impact of loneliness, which remains relevant even to this day. In 1982, Quartermaine’s Terms was awarded the Cheltenham Literary Prize, and was later adapted for television in 1987 and radio in 2006. Now the production plays a limited season at London’s Wyndham’s Theatre.

Set in a 1960’s school, Quartermaine’s Terms takes place over a period of two years in the staffroom of a Cambridge school that teaches English to foreigners. At the heart of the staff is the pleasant and overly agreeable St John Quartermaine, who is hopeless as a teacher. A permanent fixture in the staffroom, he is readily available to listen to his seven colleague’s problems. But when a new principal is appointment, Quartermaine’s future is put under question. A tragically humorous play, Quartermaine’s Terms is the ultimately moving account of the lives of seven struggling teachers.

Best-known for his roles in Mr Bean, Johnny English, Not the Nine O’ Clock News, Four Weddings and a Funeral and many, many more, Rowan Atkinson stars as the kindly Quartermaine. Most recently appearing as Fagin in the revival of Oliver!, Eyre’s production marks Atkinson’s first play on the West End in almost 25 years. He is joined by Conleth Hill, Will Keen, Felicity Montagu, Malcolm Sinclair, Matthew Cottle and Louise Ford.

Former Artistic Director of the National Theatre Richard Eyre directs the production, with past credits including Guys and Dolls, Richard III and The Beggar’s Opera. Quartermaine’s Terms features design by Olivier Award-winning Tim Hatley, lighting design by David Howe and sound design by John Leonard. A tragicomedy that balances searing wit with true human emotion, Quartermaine’s Terms is a stirring production that will tug at the heart-strings.

Special notice: Rowan Atkinson fans will love the opportunity to see him on stage! Fans of other Simon Gray plays, such as The Common Pursuit will enjoy this touching drama.

Sorry this show closed 13 April 2013, we recommend these similar productions.

SeatPlan Recommends: Seats at Wyndham’s Theatre offer amazing views, particularly because of the steep rake in the seating. Sit in the Stalls for the most intimate experience, however for those looking to see the show on a budget – seats in the higher tiers offer exceedingly good views for often a third of the price.