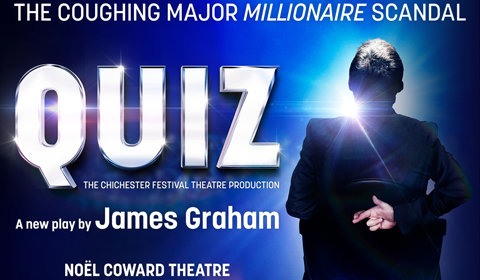 Quiz is based on the infamous 2001 coughing scandal on Chris Tarrant’s Who Wants to Be a Millionaire?, which saw contestant Charles Ingram cheat his way to the top of the much-loved quiz show. As he got closer to winning the elusive one million pounds, his wife Diana assisted in coughing to signal the correct and incorrect answers. But what were the consequences, and why did they do it? Graham’s play explores Britain’s bizarre love for a good gameshow.

Artistic Director of Chichester Daniel Evans directs, with recent hit shows including Show Boat, which transferred to the New London Theatre and Flowers for Mrs Harris. Creatives include choreographer Naomi Said and designer Robert Jones, with lighting by Tim Lutkin, sound by Ben and Max Ringham and video design by Tim Reid.

After an acclaimed pre-West End run, Quiz proves that James Graham is fast becoming one of London’s top playwrights. Quiz runs at the Noel Coward Theatre for a strictly limited season, playing from 31 March to 16 June 2018, with a press night on 10 April 2018.

Special notice: Fans of James Graham’s work, including the recent Labour of Love and Ink, will be thrilled by this latest venture, which looks at one of the biggest news stories in recent years.

Sorry this show closed 16 June 2018, we recommend these similar productions.

Quiz seat view photos show what view you will get for your money. Unfortunately we do not have any seat views for this show.

Loved every minute of the play, it was very funny in places. Keir Charles who played Chris tarr... More

Loved every minute of the play, it was very funny in places. Keir Charles who played Chris tarrant was brilliant. Wished I'd gone at the start of the run because I would have been able to go again.

A fascinating, funny and interactive play. I really enjoyed this - saw it towards the end of its... More

A fascinating, funny and interactive play. I really enjoyed this - saw it towards the end of its run and regret not seeing it earlier so I could have recommended it to more people!