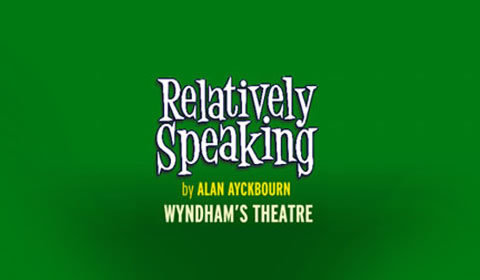 After just one month of dating, Greg has decided that Ginny is the one for him. When she tells him that she’s going away to visit her parents, Greg knows that this could be the opportune moment to ask for her father’s blessing. Discovering a scribbled address, Greg pursues Ginny across the country to Buckinghamshire, where he finds Philip and Sheila enjoying their Sunday brunch. Unfortunately, he also finds that they are certainly not Ginny’s parents. A mixed-up tale of deceit, misunderstanding and certain hilarity, Relatively Speaking the riotous play that established Ayckbourn as a theatrical master.

Felicity Kendal stars as Sheila, alongside Jonathan Coy as Philip. Kendal is best-known for her beloved television role in The Good Life, whilst Coy’s many credits include Brideshead Revisited, Downton Abbey, Foyle’s War and the recent 2011 production of Much Ado About Nothing, opposite David Tennant. Further cast members include ex-EastEnder Kara Tointon as Ginny, who has enjoyed success in the West End’s Pygmalion and Absent Friends, as well as Max Bennett as Greg, who has appeared in Posh, Anna Karenina and The Duchess.

Directed by Posner, Relatively Speaking features design by Peter McKintosh and is produced by the Theatre Royal Bath. Posner has helmed several successful productions, including Noises Off and Abigail’s Party. A classic comedy, Relatively Speaking returns to the West End with an impressive cast, plenty of chaos and whole lot of confusion!

Special notice: Fans of comedy will enjoy this delightfully English classic! Suitable for all audiences, Relatively Speaking is sure to get you laughing.

SeatPlan Recommends: There are excellent views on offer throughout Wyndham’s Theatre. Sitting in the Stalls will ensure that you feel involved in the action, however bargain seats are available in the steeply-raked higher tiers, where there are no restrictions and perfect views!

mssmittenkitten 22 May 2013
Your basket is empty.