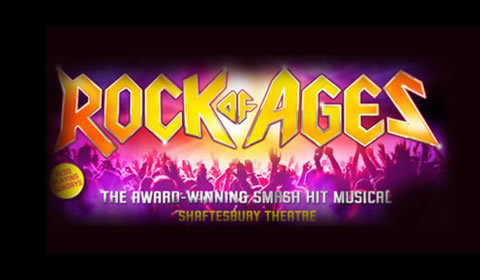 Garrick Theatre
4 seat views
Directed by Kristin Hanggi, Rock of Ages is a jukebox musical that uses classic rock songs from the 1980s to compliment an original script written by Chris D’Arienzo. ‘We’re Not Gonna Take It’, ‘The Final Countdown’ and ‘Hit Me With Your Best Shot’ are just a small taster of the rock and pop medleys that pack a punch in what is being called ‘a raucous new addition to the West End theatre’ by the Independent.

Set in on the Sunset Strip in LA, the show opens in Dennis Dupree’s Bourbon Club, the dive bar in which many a famous musician first got their big break. The protagonist Drew, part-time busboy and part-time wannabe rock star, falls for aspiring singer Sherrie, who has upped sticks and moved from a small town in Kansas to conquer LA. As power ballad ‘Sister Christian’ rings in the audience’s ears, it is quite clear that Sherrie isn’t in Kansas anymore. As the story unfolds, Sherrie and Drew must face the music and decide what is more important, love or fame?

Rock of Ages first came to the West End in 2011, playing at the Shaftesbury Theatre, and is now delighting audiences once more with a residency at the Garrick Theatre. This particular London production features rising stars Ross Hunter and Natalie Andreou, who reprises her role as Sherrie. Hunter’s past credits include My Fair Lady Proms at the Royal Albert Hall, Legally Blonde at the Savoy Theatre and the workshop of Charlie and the Chocolate Factory.

Special notice: Fans of classic 1980s tunes will enjoy this trip down memory lane. Mild sexual references and language is used throughout, meaning the show may not be suitable for audience members below 12.

SeatPlan Recommends: The cast regularly interact with the audience in the front Stalls section.