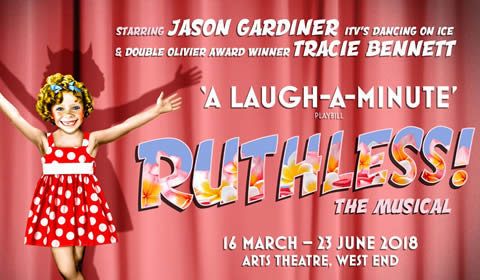 Arts Theatre
82 seat views
How far would you go to get what you want?

Off-Broadway cult classic Ruthless! The Musical comes to the Arts Theatre over a decade after its London premiere at Stratford Circus by production company Okai Collier. The all-female musical about 8-year old Tina Denmark’s quest for fame spoofs classic Broadway musicals such as Mame and Gypsy and iconic films All About Eve and The Bad Seed.

Laura Bell Bundy played the original Tina, who will do anything to play the lead in her primary school musical. Encouraged by her mother Judy and a dubious agent, Tina auditions but is cast as the lead’s understudy. This sets off a darkly funny chain of events and revelations, but Tina never takes her eyes off her goal.

Ruthless! The Musical is the 1993 Outer Critics Circle Award-winner, and is known for discovering young talent including Natalie Portman and Britney Spears, who both understudied the role of Tina in the 1992 production.

This production directed by Richard Fitch, with choreography by Rebecca Howell, design by Morgan Large, lighting design by Tim Lutkin and sound design by Gregory Clarke, as well as musical supervision by Gareth Valentine.

A killer, cult classic, Ruthless! The Musical is guaranteed to entertain. Performances run at the West End’s Arts Theatre for a strictly limited season, from 16 March to 23 June 2018, with a press night on 27 March 2018.

Special notice: Fans of lesser-known and cult musicals won’t want to miss this. Anyone looking to support female-led work in the West End will want to make sure they book a ticket to see this all-star cast!

Sorry this show closed 23 June 2018, we recommend these similar productions.

Ruthless! The Musical seat view photos show what view you will get for your money. Unfortunately we do not have any seat views for this show.