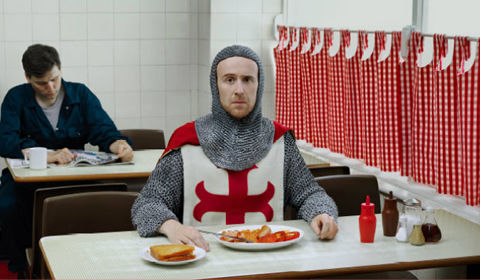 Saint George and the Dragon Tickets

Set in a little village, Saint George and the Dragon is the well-known story that combines the fairytale dragon and damsel in distress. When wandering Knight George walks in, an impressive battle ensues and sees a new nation born. George is a freedom fighter and an enemy of tyrants across the world.

As the village grows into a town, then into a large city, the inexplicable myth of Saint George is doubted. The legend that once brought people together quickly threatens to divide them.

Saint George and the Dragon is the fun folk tale that brings the story well into the future. Playing at the Olivier Theatre throughout winter, the production runs from October 4th to December 2nd 2017, with an official press night on October 11th 2017.

Special notice: Fans of Lyndsey Turner’s work will recognise her signature style here, whilst the engaging story is sure to enthral theatregoers of all ages. Catapulted into the future, this is not one to miss!

Sorry this show closed 02 December 2017, we recommend these similar productions.

SeatPlan Recommends: Seats throughout the Olivier Theatre offer excellent views of the stage. Sit in the centre of the Stalls for the best overall views, although bargains can be found toward the ends of rows, where rows curve but do not restrict the action.

Sit in the Circle for a great overall view of the stage, although action could seem distant.

I really enjoyed the show although it wasn’t at all what I was expecting. I expected it to be all medieval... More

I really enjoyed the show although it wasn’t at all what I was expecting. I expected it to be all medieval with knights and dragons when in fact it moved through quite a few eras with an unusual twist at the end. The actor that played Saint George was very good.

A great and refreshing take on the mythical story of "Saint George And The Dragon".

Interesting stage design - as one remarked, they always have, here. A vertiginous 3D effect, with houses... More

Interesting stage design - as one remarked, they always have, here. A vertiginous 3D effect, with houses perched high on the wall - projections suggest additional design features that weren't actually built. The stage also revolves, revealing a hidden compartment under the lip that is initially at the back, which allows more intimate, and indoor, scenes to be played. I didn't really know what to expect from this play, whose promotional photo shows St. George, in mediaeval armour, looking a bit glum as he has a fry-up at a greasy spoon. In a way, it does exactly what it says on the tin - they have poor St. George travel through the ages, fighting a succession of different dragons as he goes. So, in the first part, you're lulled into a false sense of security, thinking that this is a conventional, mediaeval drama, as he appears, fights a - reasonably - conventional dragon, saves the damsel, then has to speed off again - more dragons to be slain, don'tcha know? Funny script, and seriously good surround sound effects for the dragon in this part - and the dragon is visually dramatic, if not quite up to CGI standard. Well, after vanquishing the dragon (spoiler), he leaves on his quest, urging the villagers to strive for more, and for better. By 'eck, they manage a lot in the year he's away - 700-odd years of progress, and they have factories, locomotives - and dragons of a different nature. That brought us up to the break, where I slipped out to the loo, and to get some chocolate (which was dinner - they're out of bread in the office, except seeded, which I don't like). After the break, not as much progress - they only managed to progress to the present day. But how can George make himself relevant in modern society? Indeed, do we even want him to? and if not, why not? Maybe his view is too black and white? Maybe we don't want to give up our achievements, even if they are damaging us as a society? Very interesting, thought-provoking play - I liked it very much, and it's a shame all those seats were left empty.

‘Saint George and the Dragon’ was a disappointment for me. It was split into 3 parts /eras and I found... More

‘Saint George and the Dragon’ was a disappointment for me. It was split into 3 parts /eras and I found the story of Saint George trying to slay the dragon in each era quite baffling and silly. The dragon itself seemed to be a metaphor for the demon in each and every one of us but for me the message didn’t really come across well on stage. The only thing I was impressed with was the set design which made good use of the Olivier’s huge stage (however the arrival of the dragon’s head felt very amateur to me). It was a shame the theatre was half empty when I went – it’s the quietest I’ve seen the Olivier!

An enjoyable show but not one I'd rave about. Julian Bleach (or Davros to Whovians) absolutely stole... More

An enjoyable show but not one I'd rave about. Julian Bleach (or Davros to Whovians) absolutely stole the show as the Dragon. Without him, I don't think I'd have enjoyed this as much as I did.