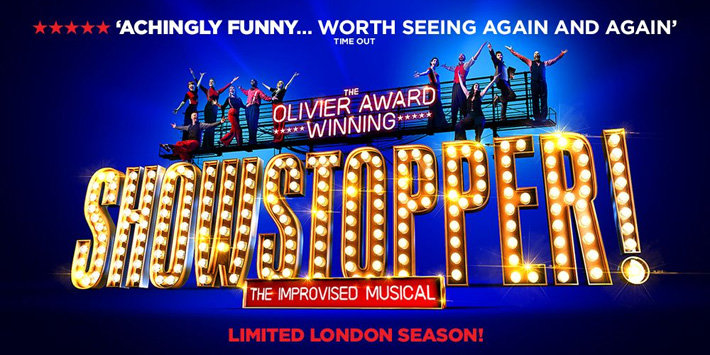 A new musical every night

Enjoy a brand new musical every night as improv troupe The Showstoppers return for their Monday residency at the Lyric Theatre.

Transforming prompts for name, setting, musical style and more into all-singing, all-dancing shows, Showstopper! The Improvised Musical sees a top producer recruit you, the audience, to help with his latest hit. The actors, band and tech team pull together to create an impromptu musical that’s as wacky as it is wonderful.

Whether it’s Area 51 adventures with a big-band soundtrack or The Garden of Eden inspired by Andrew Lloyd Webber, every night is a premiere with the Showstopper! team!

Showstopper! The Improvised Musical premiered at Edinburgh Fringe Festival, before transferring to the West End for a series of residencies. The troupe, who won the 2016 Olivier Award for Best Entertainment and Family, is led by creators and performers Adam Meggido and Dylan Emery.

Combining the jazz-hands of a Broadway hit with the eccentric charm of the Fringe, Showstopper! tickets promise for a wholly unique evening of hilarious characters, fantastic dance routines and on-the-spot songs.

Showstopper! The Improvised Musical seat view photos show what view you will get for your money. Click 'book this seat' and we will search for availability for your chosen seat.

Earn double Rewards points by adding your Showstopper! The Improvised Musical seat view photo! Use your points for Theatre Tokens and Encore Tickets vouchers and get money off your next theatre trip.