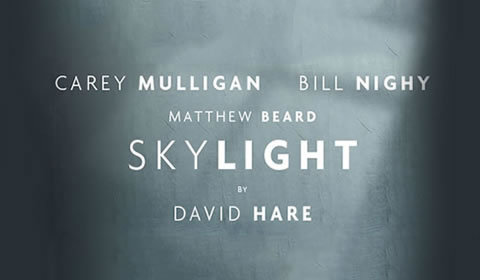 Set on a bitterly cold London evening, young schoolteacher Kyra Hollis receives an unexpected visit from her former lover Tom Sergeant, a successful and charismatic restaurateur whose wife recently died, and for whom she used to work for. As the evening continues, the two attempt to rekindle their once passion-fuelled love, only to become locked in a malicious battle of opposing ideologies and mutual desires. Skylight originally starred Michael Gambon opposite Lia Williams, premiering at the National before moving to Wyndham’s Theatre.

Starring as Kyra, Carey Mulligan makes her London debut alongside Hollywood stars Bill Nighy and Matthew Beard. Mulligan began her career in Pride and Prejudice opposite Keira Knightley, and has since starred in Bleak House, Public Enemies, Drive and most recently, The Great Gatsby with Leonardo DiCaprio. Bill Nighy is well-known throughout Hollywood, with extensive stage and screen credits including Love Actually, The Best Exotic Marigold Hotel and The Vertical Hour. Matthew Beard has recently appeared in An Education and One Day.

Written by playwright and screenwriter David Hare (The Judas Kiss, The Reader), Skylight is directed by Stephen Daldry, who recently directed sell-out West End hit The Audience, as well as An Inspector Calls and Billy Elliot. Opening at Wyndham’s Theatre for a limited season, Hare’s drama about the consequences of love stars a Hollywood duo that are sure to set the pulses racing.

Special notice: Those who enjoy tense, hard-hitting dramas are sure to find Skylight appealing. Please note that due to repeated sexual references and mild adult content, this play is not suitable for children.

SeatPlan Recommends: The Wyndham’s Theatre offers excellent views throughout the auditorium, due to a steep raking of the seats. Sit in the higher tiers for bargains, particularly in the Grand Circle, where seats are very cheap but offer exceptional views. The best overall views can be found in the mid-front of the Royal Circle.