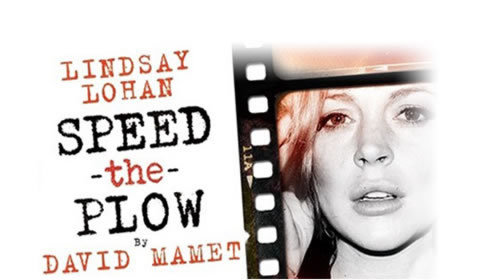 Playhouse Theatre
8 seat views
Hollywood star Lindsay Lohan makes her stage debut in David Mamet’s acclaimed satire Speed-the-Plow at London’s Playhouse Theatre. Directed by Lindsay Posner (Sexual Perversity in Chicago), Speed-the-Plow is a tongue-in-cheek portrayal of the Hollywood industry from the author of American Buffalo and Glengarry Glenn Ross. Opening on the West End in September 2014, the production is set to run for a strictly limited season.

Speed-the-Plow follows film producers Bobby Gould and Charlie Fox, who are convinced of their big break when a hugely bankable star agrees to appear in a definite commercial hit. But the arrival of Karen, the new temporary secretary, turns everything on its head as she sets about derailing the dream. As the men make bets on who will get to sleep with her first, Karen has her own agenda, as she convinces Bobby to dump the blockbuster in favour of box-office poison. A darkly hilarious, high-octane modern classic, Speed-the-Plow is rife with Mamet’s mesmerising wit and dialogue.

Lindsay Lohan has become a household name, through films such as Mean Girls, Freaky Friday, The Parent Trap and Confessions of a Teenage Drama Queen. Speed-the-Plow marks her official stage debut, as she plays Karen alongside Richard Schiff as Bobby and Nigel Lindsay as Charlie. Schiff is star of The West Wing, whilst Lindsay has had numerous stage appearances, including Shrek the Musical as well as work at the Donmar, Royal Court and Almeida Theatre.

Originally opening on Broadway in 1988, starring Madonna as Karen, Speed-the-Plow is directed by Posner, who has directed more Mamet plays than any other London director. Further West End credits include The Winslow Boy, Uncle Vanya and Abigail’s Party. A witty, interesting production, Speed-the-Plow opens at the Playhouse Theatre in September 2014 for a strictly limited run until November. Don’t miss out!

Special notice: This is the first opportunity to see Hollywood star Lindsay Lohan on stage! Fans of Mamet’s work will also enjoy this production, which is directed by a Mamet veteran and takes on the form of a sitcom. Speed-the-Plow is not suitable for children.

Sorry this show closed 29 November 2014, we recommend these similar productions.

SeatPlan Recommends: Seats in the Stalls at the Playhouse Theatre are always the best bet, with some bargains to be had towards the rear of the sitting. Sit in the Dress Circle for the best overall views of the stage, but the Upper Circle also offers decent views for a discounted price.