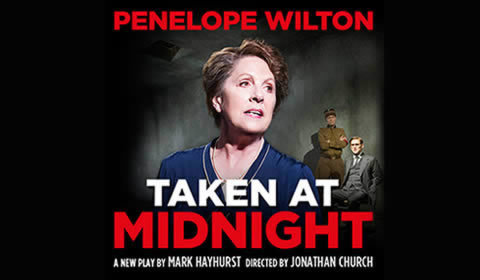 Set in 1931, Taken at Midnight is Hayhurst’s theatrical debut, documenting lawyer Hans Litten, who makes a dangerous move during the trial of a group of brutal SA men. Calling Herr Hitler to the stand, Litten questions him incessantly, letting him feel the full force of his quick wit. Two years on, during the night of the Reichstag fire, Hitler gets his revenge by arresting Litten without trial. At huge personal risk, Litten’s mother Irmgard confronts her son’s captors with a fearless and resolute attitude, fighting for his release against the overbearing might of the Nazis.

Directed by Jonathan Church, Taken at Midnight features music by Matthew Scott, lighting design by Tim Mitchell and sound design by Mike Walker. A tale of the unquestionable love a mother has for her son throughout the height of an irrepressible regime, Taken at Midnight is a hard-hitting drama that studies the horrors of pre-war Nazi Germany. Starring Penelope Wilton, Taken at Midnight transfers to the Theatre Royal Haymarket opens for a limited season beginning in February 2015.

Special notice: Those interested in history will find this well-documented play an interesting insight into pre-war Nazi Germany. Fans of Penelope Wilton will enjoy seeing her perform in this acclaimed role.

Sorry this show closed 14 March 2015, we recommend these similar productions.

SeatPlan Recommends: Seating within the Theatre Royal Haymarket is generally good, but for an intimate play such as this, it is probably best to be seated in the mid-front of the Stalls. Be aware that the further back in the Stalls you get, the more the overhang of the Royal Circle may obstruct the view.