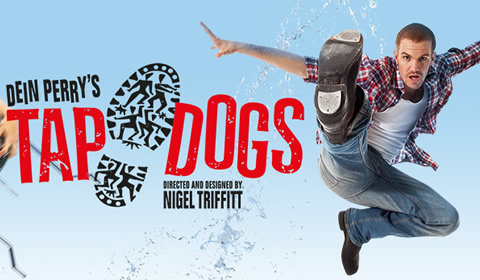 After training as a machinist, creator Dein Perry moved from Newcastle to Sydney to pursue a dance career. Following a turn in popular musical 42nd Street, he decided to create his own work to honour his background as a labourer and the industrial life in Newcastle. Tap Dogs was born as an early version called Tap Brothers, which led to an offer to co-choreograph West End musical Hot Shoe Shuffle, which swiped an Olivier Award in 1995. Since then, Perry has regularly toured Tap Dogs around the world and earned a second Olivier Award for its run in the West End.

Now, Tap Dogs returns, combining live music and sensational, electrifying tap dance to create a high-octane show that has won over 11 international awards, including an Obie Award and Pegasus Award. A global smash-hit, the show has played in over 330 cities and has been experienced by over 12 million people.

Not content with taking over the world with his unique style of tap show, Dein Perry founded a dance school in the 2000’s. Tap Pups has since grown into a much bigger endeavour, passing on the ethos of Tap Dogs to a new generation of dancers with a passion for tap dancing.

The brilliant talent and high energy of Tap Dogs brings an incredible vibe to London’s dance scene. Playing a strictly limited London season at the Peacock Theatre, the production plays from 23 October to 10 November 2018.

Special notice: Tap Dogs encourages young people to attend their shows, so all tickets for those under 16 years old are half price. This is a great way to introduce children to dance, particularly boys and young men, though all young people must be accompanied by an adult. Adults will still love this show, and it’s a great one to pick if you have limited dance-going experience.

Sorry this show closed 10 November 2018, we recommend these similar productions.

Tap Dogs seat view photos show what view you will get for your money. Unfortunately we do not have any seat views for this show.