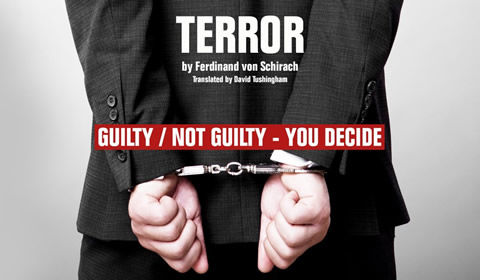 Lyric Hammersmith
7 seat views
Ferdinand von Schirach’s courtroom drama Terror receives its UK premiere at the Lyric Hammersmith. Playing for a limited season, Terror is the worldwide phenomenon that has been performed across the globe. A pertinent examination of terrorism, the play is translated by David Tushingham.

Guilty or not guilty, you decide. Terror sees the audience enter the courtroom to hear evidence and come up with their own conclusion. When a hijacked plane begins to plummet toward a packed football stadium, a fighter pilot shoots it down against orders, killing 164 people but saving 70,000.

Now the pilot is on trial for murder, and it’s the audience’s decision to determine his fate. Is he guilty? Stirring debate across the globe, Terror has seen opposing results in different cultures and countries.

German writer and lawyer Ferdinand von Schirach’s play has been performed around the world, in Japan, Denmark, Slovenia, Switzerland and Hungary. Terror played at the Lyric Hammersmith for a limited season from June 14th to July 15th 2017.

Special notice: This is an excellent chance to see a worldwide phenomenon!

Terror is suitable for those aged 14 and up.

SeatPlan Recommends: Sit in the middle of the Stalls for the most immersive experience with this particular play. Avoid seats at the very ends of rows, as these can be angled toward the stage, which cuts off some of the action.

Sitting in the higher tiers is a good option if you remain central and toward the front, however these seats are usually a better option for musicals rather than plays.