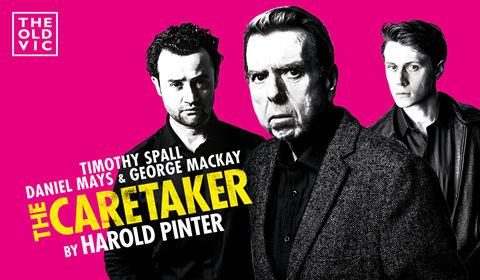 Old Vic Theatre
0 seat views
British stage and screen legend Timothy Spall took on the leading role in Harold Pinter’s tragicomedy, The Caretaker. Spall played Davies, an irritable tramp who disturbs the relationship between two brothers when he is invited into their home.

After being involved in a bar fight, Davies is invited home by good-natured handyman Aston. As it becomes clear just how vulnerable Aston is, it seems that his manipulative guest may take advantage of this stroke of luck. However, when Aston’s violent brother arrives on the scene, relationships are thrown into turmoil and expose the power struggles between the three men.

The Caretaker premiered in 1960 and became one of Pinter’s first commercial successes, running for an impressive 444 performances before transferring to Broadway. This absurd tragicomedy has been likened to the work of Samuel Beckett for its focus on language rather than narrative action. Praised by academics and audiences alike, Pinter was awarded the Nobel Prize in Literature in 2005.

For the role of Davies, audiences couldn’t ask for more than Timothy Spall – one of Britain’s most recognised and well-loved character actors. Delighting audiences as Peter Pettigrew in the Harry Potter film series and Beadle Bamford in Sweeney Todd: The Demon Barber of Fleet Street, Spall also won Best Actor Award at the Cannes Film Festival (2014) for the title role in Mr. Turner.

The Caretaker played as part of Matthew Warchus’ inaugural season at the Old Vic which included: Future Conditional, The Hairy Ape, The Lorax, and Harry Potter co-star Ralph Fiennes in The Master Builder.

Special notice: This production is undoubtedly a treat for fans of Spall’s previous work. Warchus’ debut season at the Old Vic is shaping up to be seminal, so we recommend for lovers of high quality, though-provoking theatre.

SeatPlan Recommends: Seats in the middle of rows offer the best views of the stage, but for this subtle production it will be best to sit as close as possible. Beware of pillars and Dress Circle overhang in the stalls at Row Q, Row W and Row X – if booking here it’s best to call the box office and make sure your view of The Caretaker won’t be restricted.

Nobody has added a seat view photo for The Caretaker at Old Vic Theatre yet, please be the first to share your experience.
Your basket is empty.