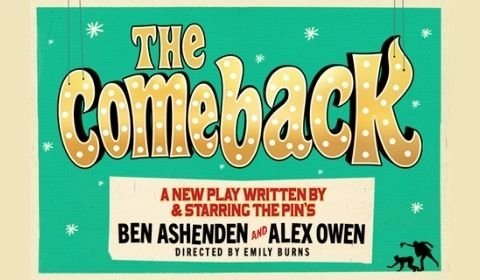 Comedy duo The Pin bring backstage rivalry and industry ambition to the West End this Summer with hilarious new show The Comeback. The joyfully silly farce, complete with special guests at each performance, opens at the Noel Coward Theatre.

When up-and-coming comics Ben and Alex are booked to open for an older double act’s comeback tour, they’re not exactly thrilled by half-empty audiences in regional seaside towns. But after rumours fly about a Hollywood producer attending the show, a cutthroat battle for stardom begins, and chaos reigns both on and off the stage.

The Comeback is Ben Ashenden and Alex Owen’s (BBC Radio 4’s The Pin) debut play, with the duo starring as young comedians Ben and Alex. They will be joined at each performance by a special guest as the Hollywood producer, with previous cameos including Joanna Lumley, Graham Norton and Danny Dyer.

Combining classic charm and slapstick reminiscent of Noises Off and The Play That Goes Wrong, don’t miss out on The Comeback tickets when it opens for a limited season in July.

Sorry this show closed 25 July 2021, we recommend these similar productions.

The Comeback seat view photos show what view you will get for your money. Click 'book this seat' and we will search for availability for your chosen seat.