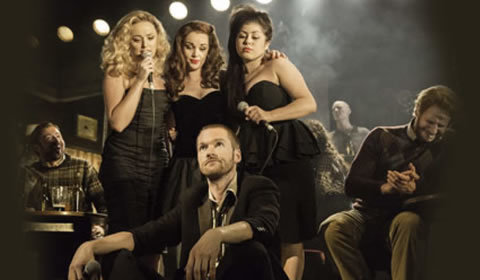 Palace Theatre
72 seat views
This new musical based on Roddy Doyle’s cult classic novel of the same name received its world premiere at the Palace Theatre back in 2013 where it continues to have packed audiences on their feet and dancing in the aisles night after night.

As a real crowd pleaser, the musical is packed full of laugh out loud moments and over 20 soul classics played live on stage including “Try A Little Tenderness,” “I Heard it Through the Grapevine,” “Knock on Wood,” “River Deep, Mountain High” and “Mustang Sally.”

The story, based on Roddy Doyle’s 1987 novel which was famously made into the BAFTA Award winning 1991 movie, is set in 1980’s Dublin where two friends decide to form a band, their only problem is they know nothing about music. That’s where music fan Jimmie Rabbitte comes in, he agrees to be the bands manager, names them "The Commitments" and, by placing an add in a local paper, pulls together a motley crew of unemployed friends and musicians in the hope of causing a soul revolution in Ireland.

The original production starred Killian Donnely as Deco. Donnely has since gone on to star opposite Beverley Knight in Memphis and will head up the West end premiere of Kinky Boots.

The Commitments is directed by star director Jamie Lloyd. Lloyd is the Artistic director of Trafalgar Transformed where he has become known for his classic productions with celebrity casts including Macbeth with James McAvoy and Richard III with Martin Freeman. The show also features an impressive double level set by Soutra Gilmour.

Don’t miss this fantastic production currently playing at the Palace Theatre, which is due to close on the 1st of November 2015.

A guaranteed great night out that will have you on your feet and dancing by the end.

Special notice: If you’re a fan of a jukebox musical then this is the show for you. Fans of soul music or the film will not be disappointed. This is a great night out for the whole family but do please note this show is recommended for 12+ as it contains some mild scenes of an adult nature and the occasional swear word.

Sorry this show closed 01 November 2015, we recommend these similar productions.

SeatPlan Recommends: As the set is sometimes split over two levels, the best place to view the whole picture is the middle of the Stalls or the middle of the Dress Circle. The Palace Theatre's Balcony level is notoriously high up and far back from the stage; do not sit here if you have a fear of heights or a mobility issue.