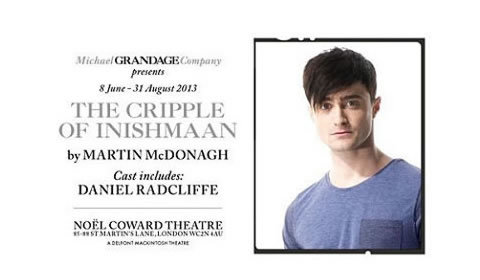 The Cripple of Inishmaan Tickets

Noel Coward Theatre
4 seat views
Daniel Radcliffe stars as the title role in Martin McDonagh’s darkly comic The Cripple of Inishmaan. Directed by legendary Michael Grandage as part of a season of extraordinary plays at the Noel Coward Theatre, The Cripple of Inishmaan is a tale of innate aspirations and raw human nature that receives its first major London revival since premiering at the National Theatre in 1996.

Set on the remote island of Inishmaan, off the coast of Ireland, The Cripple of Inishmaan follows a small community who learn that a Hollywood film is about to be made on the neighbouring island of Inishmore. When young cripple Billy Claven discovers this, he becomes determined to be part of the film, if only to break away from the tedium of his everyday life. With the odds stacked against him, Billy fights for his opportunity to escape his life of cruel mockery and endless patronising gossip. A superbly dark comedy told by the whole community, the humdrum life on Inishmaan is opened one rumour at a time.

Acclaimed Harry Potter actor Daniel Radcliffe stars as Billy, in his next stage appearance since Equus and How to Succeed in Business Without Really Trying. Further cast members include Ingrid Craigie, Padraic Delaney, Sarah Greene, Gillian Hanna, Gary Lilburn, Conor MacNeill, Pat Shortt and June Watson. The Cripple of Inishmaan is written by McDonagh, who has endless plays to his name, including the well-known The Pillowman, The Beauty Queen of Leenane and The Lieutenant of Inishmore.

Directed by Grandage, who has countless credits to his name including Guys and Dolls, Privates on Parade, Evita and Richard II, The Cripple of Inishmaan features design by Christopher Oram, lighting design by Paule Constable and a musical score composed by Alex Baranowski. Receiving rave reviews from audiences and critics alike, McDonagh’s The Cripple of Inishmaan opens at the Noel Coward Theatre in early 2013.

Special notice: Those who have enjoyed McDonagh’s previous works will find something slightly more humorous here. This is also an opportunity to see Daniel Radcliffe’s critically acclaimed performance as Billy!

SeatPlan Recommends: Seats in the Noel Coward Theatre offer excellent views, particularly from the middle of the Stalls. The stage is not too high, so there are limited restrictions. Bargains can be found towards the ends of rows, where prices dip but the views are substantial.

clairemichelle 29 Jan 2017
Your basket is empty.