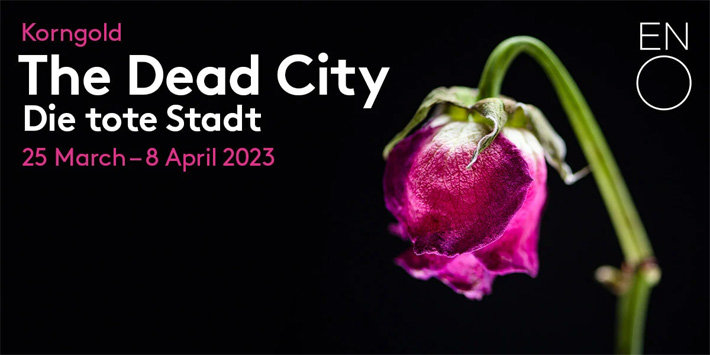 A cult classic about undying love

A tale of life, death and love comes to the London Coliseum in The Dead City (Die tote Stadt). Directed by ENO Artistic Director Annilese Miskimmon, this cult classic is a compelling and darkly beautiful opera.

The recently widowed Paul is haunted by visions of his wife, Marie. When he meets Marietta, he gets the uncanny feeling that he’s seen her somewhere before. Soon, past and present become confused and Paul is left questioning what is right in front of his eyes.

Academy Award-winning composer Erich Wolfgang Korngold, best known for his influence on film music, was inspired by Georges Rodenbach’s novel Bruges-la-Morte when writing his The Dead City opera, which premiered in Cologne and Hamburg in 1920.

Alongside director Annilese Miskimmon, Korngold’s exciting and theatrical score is conducted by Kirill Karabits, and ushers audiences into the darkest corners of the Dead City. The Dead City London cast includes Rolf Romei as Paul, Allison Oakes as Marie/Marietta, and Sarah Connolly as Brigitta.

Step across the boundaries of grief, love and remembrance with The Dead City opera tickets, playing at the London Coliseum in 2023.

Special notice: This production is sung in English, with surtitles displayed above the stage.

The Dead City seat view photos show what view you will get for your money. Our users will start adding seat views when the show opens.