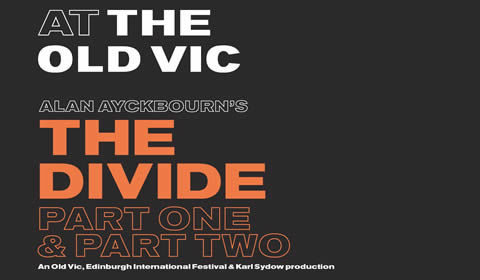 Set in a future dystopian society, the The Divide follows in the wake of a deadly contagion which has decimated the English population and rendered contact between men and women lethal. Through the twisted preaching of a mysterious pastor, a hereto unthinkable solution is reached – the total gender segregation of the survivors.

Brother and sister, Elihu and Soween, raised in the repressive society begin witnessing the cracks in the brutal regime. A forbidden love affair arises as between Elihu and the daughter of two activist mothers, threatening to provoke a bloody revolution.

The ambitious and powerful production receives its premiere at the prestigious Edinburgh International Festival August 2017, before going on to a limited run at the Old Vic from the 1st to 10th February 2018. Book now for Part 1 of this revolutionary double-bill.

Special notice: Fans of writer Alan Ayckbourn’s prolific back catalogue will not want to miss the chance to catch one if his most daring projects to date.

SeatPlan Recommends: The centre of the Stalls is a fantastic position for Old Vic productions, however those hoping for a more panoramic view of this visually stunning, large scale performance.

Nobody has added a seat view photo for The Divide Part 1 at Old Vic Theatre yet, please be the first to share your experience.
Your basket is empty.