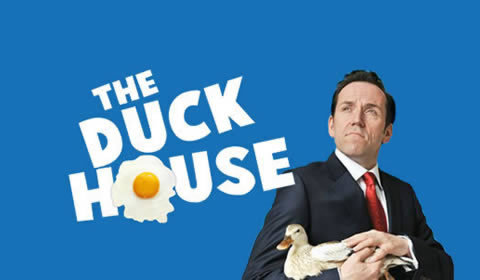 Vaudeville Theatre
1 seat views
Ben Miller stars in the outrageous new political satire The Duck House, written by Dan Patterson (Mock the Week) and Colin Swash (Have I Got News For You). Directed by Tony and Olivier Award-winning Terry Johnson, The Duck House pokes fun at the 2009 MP’s Expenses Scandal with hilarious consequences. Playing a limited season at the West End’s Vaudeville Theatre, catch the catastrophic comedy before it departs in March 2014.

Set in May 2009, Gordon Brown’s government is in rapid meltdown after a less-than successful appointment as Prime Minister and a General Election is only a year away. Labour backbencher Robert Houston spies his chance to save his seat in parliament – by switching sides. But just as he begins the final stretch from red to blue, the Expenses Scandal breaks. Desperate to defend his seat, Robert and his staff, which consist of his family members, must do all they can to cover up dodgy expense claims. Descending into a dizzying comedy of errors, The Duck House is the riotous comedy that sees wires crossed, pockets exposed and a whole load of secrets unearthed.

An all-star cast leads The Duck House, with Ben Miller at the helm as Robert. Miller is best-known for being half of award-winning comedy duo The Armstrong and Miller Show, as well as starring in BBC1’s Death in Paradise. Further cast members include Olivier Award-winning actress Nancy Carroll (After the Dance) as his wife Felicity, Debbie Chazen as Russian housekeeper Ludmilla, James Musgrave as Seb, Simon Shepherd as Sir Norman Cavendish and Diana Vickers as Holly.

Directed by Terry Johnson (End of the Rainbow), The Duck House features design by Lez Brotherston, lighting design by Mark Henderson and sound design by John Leonard. Written by a pair known for being at the forefront of political jibes throughout the scandal, Dan Patterson and Colin Swash decided to produce a play as a result. An outrageously side-splitting new farce about the world of dodgy dealings and Parliamentary panic, The Duck House opens at London’s Vaudeville Theatre for a limited season.

Special notice: Suitable for ages 14 and up, The Duck House is perfect for those who love a bit of political drama. Anyone who knows about the Expenses Scandal will relish this naughty comedy!

Sorry this show closed 29 March 2014, we recommend these similar productions.

SeatPlan Recommends: Seats in the Vaudeville Theatre offer excellent views due to the intimacy of the theatre. Sit in the Dress Circle for a bargain seat and excellent view of the whole stage! Be aware that support pillars are dotted throughout the theatre, so it’s best to double-check tickets before you book!