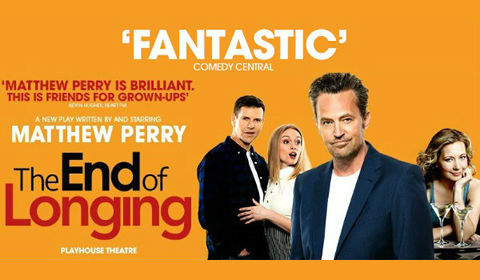 The End of Longing Tickets

Playhouse Theatre
30 seat views
Matthew Perry, star of the hugely famous and beloved American sitcom Friends, makes his playwriting debut at London’s Playhouse Theatre. Directed by the prolific Lindsay Posner, The End of Longing is a darkly comic play, based on the universal struggles of turning forty entirely alone.

Set in downtown LA, The End of Longing sees friends Jack and Joseph, and Stephanie and Stevie become irreversibly entangled after a chance encounter at a bar. As they celebrate wildly, the four pair off into unlikely couples which force them to face the more complicated sides to themselves. Whilst Jack struggles with alcoholism, Stephanie must seriously consider her career, and although Stevie is desperate for the perfect family life, she is not entirely convinced that she will find happiness with Joseph. As time goes on, the four soon realise that something in their lives must change.

Matthew Perry stars as Jack, marking his first return to the West End since he featured in Lindsay Posner’s Sexual Perversity in Chicago in 2003. Perry is best-known for his popular role as Chandler in Friends, as well as various film and television credits including Mr Sunshine, 17 Again and his current sitcom, The Odd Couple. Further casting includes Broadway star Jennifer Mudge (The Philanthropist, Rocky) as Stephanie, Christina Cole (Casino Royale, Suits, New Tricks) as Stevie and Lloyd Owen (The Bodyguard, Good People) as Joseph.

Director Lindsay Posner has extensive credits, including Uncle Vanya, The Turn of the Screw and Speed the Plow, which starred Lindsay Lohan. The End of Longing features design by Anna Fleischle, lighting design by Lucy Carter and sound design and composition by Isobel Waller-Bridge. A hard-hitting, yet darkly hilarious comedy, The End of Longing is a relevant rollercoaster ride of emotions which opens at the Playhouse Theatre London for a limited run.

Special notice: Fans of Friends will find similarities in this sitcom-like production. Those who appreciate American humour will also enjoy this production.

Sorry this show closed 14 May 2016, we recommend these similar productions.

SeatPlan Recommends: The Playhouse Theatre offers good views throughout the auditorium. Sit in the front of the Dress Circle or Stalls for the best view. If looking for good views on a budget, sit in the back rows of the Stalls, which offer excellent views.

I enjoyed The End of Longing more than I thought. The draw for this show was Mr Perry, but I was concerned... More

I enjoyed The End of Longing more than I thought. The draw for this show was Mr Perry, but I was concerned that it would actually be terrible and I would hate every minute but it actually wasn't the case. It was incredible enjoyable, funny and entertaining. The cast were very engaging and the rhythm of the play was fast paced without rushing. I thought it's take on relationships was modern, fresh and believable.

Whilst it was exciting to see Matthew Perry on stage in a play he had written himself, the narrative... More

Whilst it was exciting to see Matthew Perry on stage in a play he had written himself, the narrative fell unfortunately flat. The play felt more like 3 episodes of a sitcom than a play structure. This is no fault on Matthew Perry, as this is of course what he has most experience in. But the writing style didn't translate well to the stage. A few occasional laughs but nothing spectacular at all.

I found the play weak, and the acting more or less, the set was good.

The End of Longing ended up with me longing for it to end. There was no real story and at the end of... More

The End of Longing ended up with me longing for it to end. There was no real story and at the end of Act one I thought it was over and nearly left. The draw for this play was to see Matthew Perry and yet he added nothing to this disappointing production. The other 3 actors where the only redeeming feature of this play. I really don't have much to say other than I was glad I gave it a try but even more glad when it finished!