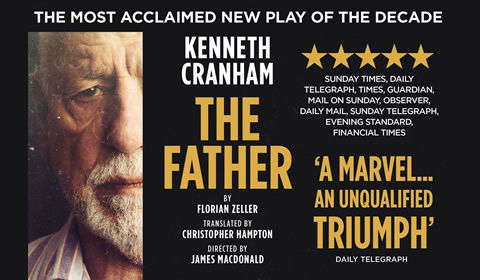 Duke of York's Theatre
5 seat views
Kenneth Cranham continues in the title role of Florian Zeller’s tragicomedy The Father, which transfers to the Duke of York’s Theatre after a critically commended run at the Wyndham’s Theatre. Directed by James McDonald (Bakkhai, Almedia), The Father is a study of the isolating effects of dementia on families and is set to embark on a UK tour.

The Father follows the day to day life of the elderly Andre, who struggles to remember his past and present. Alienated by the onslaught of dementia, Andre becomes increasingly aware that he is becoming a burden to his daughter Anne but is entirely unaware of why. Told entirely from the perspective of Andre, the audience are too plunged into a world of confusion which is, at times, distressing, as evermore frustrating situations take place.

Cranham has extensive stage credits on Broadway and the West End, including The Cherry Orchard, The Homecoming, Loot and Entertaining Mr Sloane, and was nominated for a Tony Award for his role in Broadway’s An Inspector Calls. Amanda Drew takes over the role of Anne from Claire Skinner, having previously featured in Enron and The Curious Incident of the Dog in the Night-time. Rebecca Charles, Brian Doherty, Daniel Flynn and Jade Williams also join the cast. The creative time include set design by Miriam Buether, lighting by Guy Hoare and sound by Christopher Shutt.

Special notice: Those who missed the production at the Wyndham’s now have the opportunity to see it at the Duke of York’s Theatre. Fans of gripping dramas will enjoy this revealing production.

Sorry this show closed 26 March 2016, we recommend these similar productions.

SeatPlan Recommends: Sit in the front section of the Stalls in order to avoid any potential obstructions.