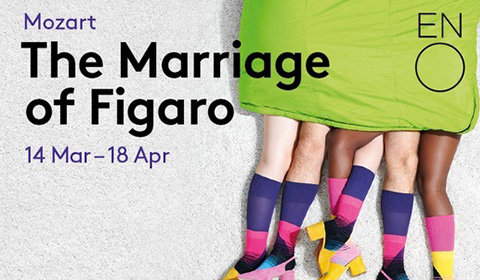 The Marriage of Figaro tickets

London Coliseum
2 seat views
ENO presents Mozart's whirlwind romp The Marriage of Figaro in collaboration with Oper Wuppertal. Catch this complex and thrilling revival at the London Coliseum from 14 March 2020.

Le Nozze di Figaro was composed by Wolfgang Amadeus Mozart in 1786 and comprises an Italian libretto by Lorenza Da Ponte. It is based on La Folle Journée, ou le Mariage de Figaro, a stage comedy by Pierre Beaumarchais. A cornerstone of history's operatic works, it continues to be performed throughout the world.

The story is a continuation of The Barber of Seville, revisited several years later. Figaro works as Count Almaviva's head of staff. He is due to be married to the lovely Susanna, the Countess' maid. The philandering Count is intent on bedding Susanna before she is wed, in what he believes to be his right as her master, despite her rejection of him. Figaro, Susanna and the Countess conspire to outwit him, and so ensues a comedy of mistaken identities, moral lessons and general mayhem.

ENO Harewood Artist Božidar Smiljanić stars as Figaro, making his role debut. Opposite him is Louise Alder in the part of Susanna. Johnathan McCullough plays Count Almaviva, while Sophie Bevan fulfils the role of Countess Almaviva.

A smart, twisting story underlaid with a glorious score, The Marriage of Figaro is a staple for opera lovers everywhere. Catch Hill-Gibbins' gorgeous revival at the London Coliseum from 14 March 2020.

Age recommendation: No under 5s.

Special notice: Devotees of Mozart’s works should be sure to secure The Marriage of Figaro tickets, as the talented director Joe Hill-Gibbins is one to watch. If you’re new to the world of opera, the show’s familiar arias and comical story line offer the perfect place to start.

The Marriage of Figaro seat view photos show what view you will get for your money. Unfortunately we do not have any seat views for this show.