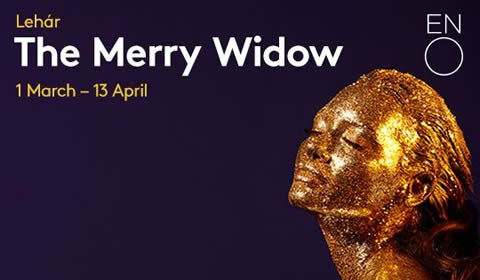 London Coliseum
11 seat views
Following its premiere in Vienna in 1905, the operetta The Merry Widow was praised as a huge success and went on to be adapted in English, German and French. After that, a Broadway run received much acclaim and ran for 416 performances. Audiences cannot resist this charming story of the spunky widow Hanna and the womanising Danilo, and the attempts to matchmake them.

The wealthy, young Hanna is the subject of a matchmaking attempt focused on keeping her wealth in the country, but she instead shows interest in somebody else. Danilo and Hanna loved each other before she was married off and the Grand Duke attempts to reignite that flame, but Danilo is stubborn and refuses. The two embark on a merry game of playful deception that nearly ends in catastrophe, but all ends happily just in the nick of time.

This endearing love story has broad appeal with plenty of comedic moments, taking place at extravagant parties marked with dancing and indulgence. Translated into English, the English National Opera strive to make opera appealing to younger audiences, and this is a great choice that guarantees loads of fun. The Merry Widow plays at the West End's London Coliseum from 1 March to 13 April 2019.

Special notice: Those who want to explore opera with a production that’s not too serious or lengthy will enjoy this update from a director well-known for his theatre work.

Sorry this show closed 13 April 2019, we recommend these similar productions.

The Merry Widow seat view photos show what view you will get for your money. Unfortunately we do not have any seat views for this show.