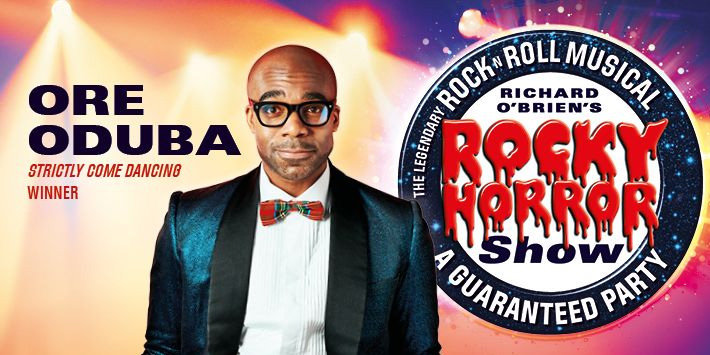 Do the Time Warp in London

Come up to the lab and see what’s on the slab! Strictly Come Dancing winner Ore Oduba stars in Richard O’Brien’s cult classic The Rocky Horror Show just in time for Halloween.

Seen by over 30 million theatregoers worldwide, this rock 'n' roll musical is the story of clean-cut Brad and Janet, who find themselves stranded when their car breaks down outside a creepy mansion. Inside, a group of kooky inhabitants take them on an adventure beyond their wildest dreams, led by the charismatic Dr Frank’n’Furter.

The Rocky Horror Show has been thrilling audiences for more than 40 years with its irresistible mix of audience participation, pelvic-thrusting dance moves, and catchy tunes including “Sweet Transvestite”, “Dammit, Janet!” and “Time Warp”.

Grab your fishnet tights, best gothic makeup and The Rocky Horror Show tickets for a fantastic night on the town! Packed full of fun, frivolity and naughtiness, the show stops off at the Peacock Theatre this Autumn.

Sorry this show closed 30 October 2021, we recommend these similar productions.

The Rocky Horror Show seat view photos show what view you will get for your money. Click 'book this seat' and we will search for availability for your chosen seat.