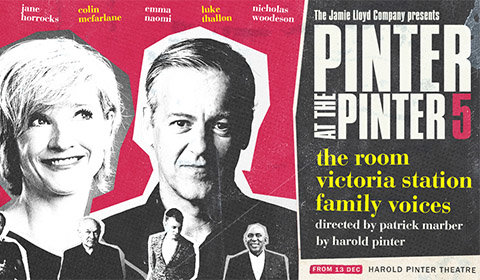 Harold Pinter Theatre
22 seat views
A decade ago this year, one of Britain’s most prolific modern dramatists passed away. To commemorate his death, The Jamie Lloyd company returns to the West End for a five-month-long residency at the Harold Pinter Theatre, presenting a variety of the Nobel Prize-winning writer’s short plays. The Pinter at the Pinter Season sees the playwright’s finest works staged in a season that features star-studded casts and stellar creative teams.

Casting includes Jane Horrocks, Emma Naomi and Nicholas Woodesen. Horrocks recently appeared in Instructions for Correct Assembly at the Royal Court and is known for her roles in The Rise and Fall of Little Voice and Absolutely Fabulous. Naomi recently appeared in Don Juan in Soho at Wyndham’s Theatre. Rupert Graves (Sherlock) also joins the cast, alongside Luke Thallon, who recently featured in the Young Vic's The Inheritance.

Nicholas Woodesen boasts decades of experience on stage and screen, with credits including Skyfall, Death of a Salesman and The Audience. Playwright and director Patrick Marber leads the piece, with recent West End credits including Don Juan in Soho, Travesties, Venus in Fur and Closer.

A rare opportunity to catch some of Pinter’s rarely seen works, The Room / Victoria Station / Family Voices are a striking triple-bill of thrilling plays, guaranteed to feature a stellar cast. An experience not to be missed, the production plays at London’s Harold Pinter Theatre from 13 December 2018 to 26 January 2019, with a press night on 3 January 2019.

Special notice: The best of British theatre appear in this season of rare Pinter plays. With much socio-political relevance today, fans of Pinter and modern theatre won’t want to pass on this season.

Sorry this show closed 26 January 2019, we recommend these similar productions.

The Room / Victoria Station / Family Voices seat view photos show what view you will get for your money. Unfortunately we do not have any seat views for this show.