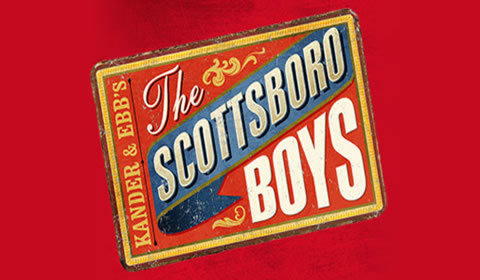 Garrick Theatre
18 seat views
Following a successful run on Broadway, The Scottsboro Boys arrived at London's Young Vic Theatre for an Off-West End run prior to transferring to The West End's Garrick Theatre.

Based on the real life "Scottsboro Boys," the show is a devastating examination of racism, as a group of nine teenagers on board a train to Memphis are falsely accused of rape by two white women. After the boys are arrested, they spend several years in jail amid an array of botched trials, rife with prejudice. Throughout the piece we learn more about each of the boys through a series of musical numbers.

The story is framed by the also real events of Rosa Parks, a women who famously refused to give up her seat in the "coloured section" of an Alabama bus for a white passenger. Park's actions, some 20 years after the Scottsboro incident, gave way to a civil rights movement that could have saved the boys from persecution. Juxtaposing mood and subject matter, the story is presented as a minstrel show, a style of performance in 19th Century America in which people with white faces “blacked up” to perform.

Presented in this heightened and at times uncomfortable style of performance, The Scottsboro Boys can be deeply upsetting, especially as the audience are witness to the "minstrels" being forced to perform by white conductors. Receiving twelve Tony Award nominations, The Scottsboro Boys lost out on a big win due to the opening of The Book of Mormon. Kander and Ebb's score has been highly praised by audience and critics alike.

Special notice: The Scottsboro Boys is not aimed at children.

Sorry this show closed 21 February 2015, we recommend these similar productions.