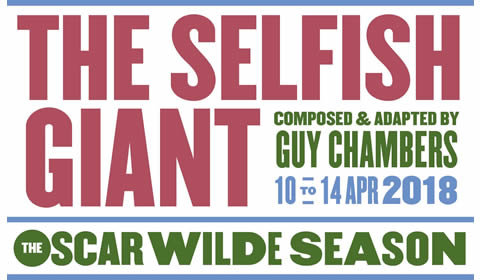 Vaudeville Theatre
3 seat views
As part of his year-long Oscar Wilde Season at London’s Vaudeville Theatre, Dominic Dromgoole presents a rarely-performed stage adaptation of Oscar Wilde’s little-known short story The Selfish Giant. Best-known for his plays, such as The Importance of Being Earnest, Wilde also wrote essays, books and poems, with stories including The Happy Prince and Other Tales in his collections for children.

The Selfish Giant is a simple yet moving tale, following a giant who lives in a house with a beautiful garden, where local children are desperate to play. When the giant doesn’t want them in his garden, he builds a large wall around it to keep them out, which causes a perpetual winter that can only be broken by the return of the children, who sneak through a gap in the wall. Quickly, the giant sees his mistake, knocks down the wall, and allows the children to play in his garden once again.

Adapted for the stage by three-time BRIT and Ivor Novello Award-winning composer Guy Chambers, who has also written some of pop singer Robbie Williams’ best-known hits, The Selfish Giant becomes a folk opera in this new production.

Set in a concert-style, accompanied by a thrilling live band, the show is directed by Bill Buckhurst, the Associate Director of Tooting Arts Club, who most recently directed the acclaimed Sweeney Todd set in a pie shop, which later transferred to New York.

Playing for a strictly limited seven performances, The Selfish Giant follows well-reviewed productions in the celebratory season, including A Woman of No Importance and Lady Windermere’s Fan. The production runs at the West End’s Vaudeville Theatre from 10 to 14 April 2018.

Special notice: Families who enjoy the original story, audiences with an interest in opera and those who enjoy adaptations of classic stories won’t want to miss this exclusive show.

The Selfish Giant seat view photos show what view you will get for your money. Unfortunately we do not have any seat views for this show.

Wasn't sure what to expect, but the show was really good. Music by Guy Chambers (can't get much better... More

Wasn't sure what to expect, but the show was really good. Music by Guy Chambers (can't get much better than that) singing was brilliant the children as well as adults all enjoyed this show, at about an hour and fifteen mins nobody got fidgety bottoms.

The show was brilliant! I loved the musical interpretation of The Selfish Giant.