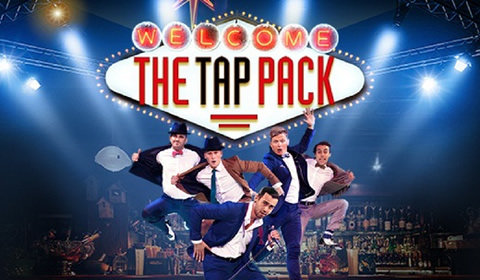 A high-octane comedy show that infuses songs by The Rat Pack, which included the talents of Frank Sinatra, Dean Martin and Sammy Davis Jr, with tap dance and plenty of jokes, The Tap Pack promises a cocktail of perfect performers and pure entertainment.

Produced by Kym Halpin, The Tap Pack is created by Jesse Rasmussen, Thomas J Egan and Jordan Pollard and features directed by Nigel Turner-Carroll. Touring across the world, the electrifying productions has been seen in countries including Australia, Italy, Germany and Thailand.

As well as smooth swing music, the show includes up-to-date songs from artists such as Ed Sheeran and Australian performers who have starred in over twenty musical theatre productions between them, as well as appearing in film and television. The show features a four-piece band who accompany the dancers live on stage.

Dressed in suits and armed with sharp wit, the world-class tap dancers of The Tap Pack troupe play at the Peacock Theatre for a limited run, from 1 May to 19 May 2018, including matinee and evening performances.

Special notice: Fans of dance and the thrilling medium that is tap will be mesmerised by this production, which combines breath-taking tap routines with the sultry music of The Rat Pack and more.

The Tap Pack seat view photos show what view you will get for your money. Unfortunately we do not have any seat views for this show.