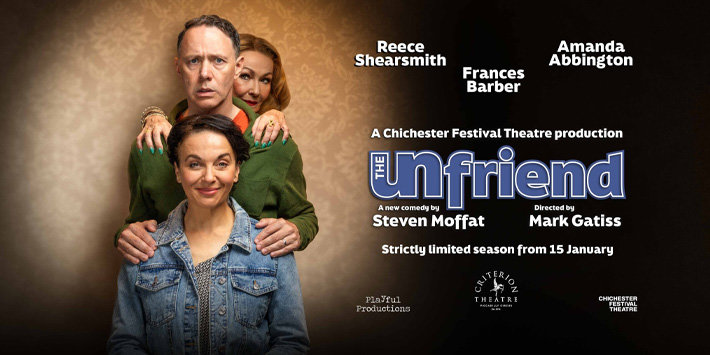 A satire of manners and murder

The Criterion Theatre reluctantly invites you to see Steven Moffat’s new play The Unfriend, a hilarious and dark satire that proves manners really can be murder…

When Peter and Debbie befriend Trump-loving widow Elsa on holiday, they exchange numbers and agree to keep in touch. What they don’t expect is for Elsa to take them seriously and invite herself to stay a few months later. When they look her up online and discover the deadly truth about Elsa Jean Krakowski, Peter and Debbie are faced with the most English problem imaginable: how do they politely get the murderous Elsa to go back home?

The Unfriend play is BAFTA Award winner Steven Moffat’s (Doctor Who; Sherlock) first play, and premiered at Chichester’s Minerva Theatre in 2022 to five-star reviews. It is directed by his frequent collaborator Mark Gatiss (Sherlock).

It really would be impolite to not book The Unfriend tickets! This brilliant satire about middle England’s compulsion to always be nice makes itself at home in the Criterion Theatre.

The Unfriend seat view photos show what view you will get for your money. Our users will start adding seat views when the show opens.