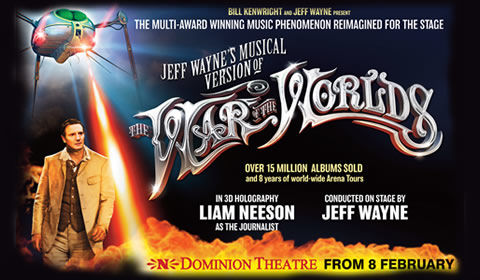 The War of the Worlds tickets

Dominion Theatre
39 seat views
Jeff Wayne’s ground-breaking musical phenomenon The War of the Worlds flies into London’s Dominion Theatre, following years of successful international tours. Originally released as a 1978 concept album that has sold over 15 million copies worldwide and has received two Ivor Novello Awards, The War of the Worlds has been spectacularly reimagined for the stage.

Based on H. G. Wells’ celebrated 1898 sci-fi novel, which has been adapted for the stage by Doreen Wayne, The War of the Worlds sees an alien invasion spread across the country, causing mass destruction. A journalist travels through an obliterated and abandoned London in hope of finding his girlfriend, all the while attempting to hide from the cruel Martians who roam the city. Determined to conquer the human race with their fearsome superior weaponry, it seems that the Martians are entirely invincible.

This breath-taking new production features a 3D hologram of Liam Neeson as the Journalist, whilst onstage actors include Jimmy Nail (Evita and Auf Wiedersehen, Pet) in his West End debut as Parson Nathaniel. Singers Daniel Bedingfield and Heidi Range also appear on the West End for the first time as The Artilleryman and Beth, alongside Michael Praed, Madalena Alberto and David Essex as The Voice of Humanity.

The War of the Worlds has developed into an extravagant theatrical experience that features sophisticated pyrotechnics, video walls and animatronics, as well as a 22 piece orchestra live onstage. Jeff Wayne conducts onstage and has provided some new music for the stage production, with lyrics in collaboration with Gary Osborne and Paul Vigrass, however the memorable, essential progressive symphonic rock score remains. Produced by Bill Kenwright and directed by Bob Tomson, The War of the Worlds promises to be just as thrilling and exhilarating as it was when first published.

Special notice: Sci-fi fans will thoroughly enjoy this thrilling spectacle, which uses the hugely famous The War of the Worlds soundtrack.

SeatPlan Recommends: The Dominion offers excellent views of the stage, particularly in the Stalls. For those who wish to be immersed in the alien experience, sit towards the front of the Stalls to feel part of the production.