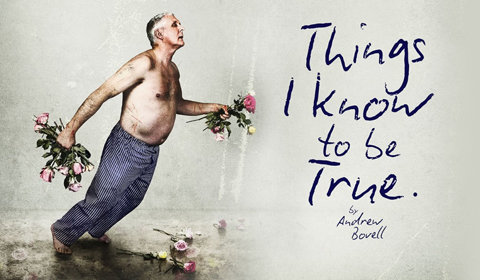 Things I Know to be True tickets

Lyric Hammersmith
4 seat views
Acclaimed physical theatre company Frantic Assembly team up with State Theatre Company South Australia on their recent tour of Things I Know to be True, which returns to the UK for a strictly limited run at London’s Lyric Hammersmith. Last appearing in the country in 2016, the return of this electrifying production is highly anticipated.

Things I Know to be True follows Bob and Fran, who have worked hard to raise their family of four children that are now grown up and ready to move out. Bob and Fran’s relationship is framed by the choices their adult children make, and it quickly becomes clear that all is not well in the family home.

A cast of six play the adult family, who execute the impressive lifts, leans and holds. This is an intimate, moving production that taps into universal truths about the trials and tribulations of an everyday working family. Frantic Assembly has over two decades of experience creating theatre with a distinct physical style, and their ability to capture emotion through movement is unparalleled.

Casting includes Ewan Stewart as Bob and Cate Hamer as Fran, alongside Arthur Wilson as Ben, Matthew Barker as Mark, Seline Hizli as Pip and Kirsty Oswald as Rosie.

Praised by critics for its choreography and pathos, Things I Know to be True plays for a strictly limited season at the Lyric Hammersmith, from 11 January to 3 February 2018, with a press night on 12 January 2018.

Special notice: Fans of physical and experimental theatre, family dramas and those familiar with Frantic Assembly’s work will love this show. Things I Know to be True is also a great introduction to this company’s work.

Sorry this show closed 03 February 2018, we recommend these similar productions.

Things I Know to be True seat view photos show what view you will get for your money. Unfortunately we do not have any seat views for this show.