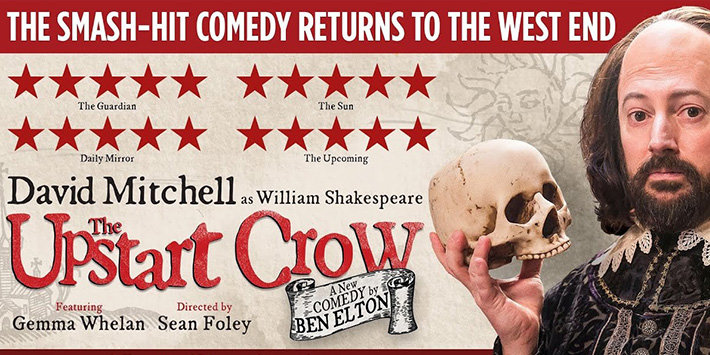 British comedy at its finest, for sooth!

Ben Elton’s brilliant historical romp, described by The Guardian as ‘The most consistently funny comedy since One Man Two Guvnors’, is back in the West End for a strictly limited 10-week season. The Upstart Crow brings the hit sitcom to life on stage in a laugh-out-loud farce that is not to be missed.

British comedy legend David Mitchell (Peep Show, That Mitchell and Webb Look) plays William Shakespeare in an earlier stage of his writing career. He is desperate for a hit, and finds plenty of inspiration from the zany characters around him – including wannabe actress Kate, his own demanding daughters and the puritan physician John Hall.

Gemma Whelan will be joining the cast again as Kate, following her warm reception in the original 2020 run. The other players are yet to be announced, but expect a fine troupe of UK comedy talent. Creative powerhouse Ben Elton writes the script, which he assures is a standalone work and not simply an adaptation of the popular sitcom.

Book The Upstart Crow tickets for a guaranteed night of big laughs this Autumn. It’s a mad-cap cavalcade of Shakespearian shenanigans.

Running time: 100 minutes plus one interval

Upstart Crow seat view photos show what view you will get for your money. Our users will start adding seat views when the show opens.