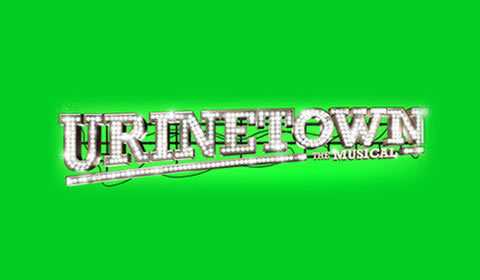 Apollo Theatre
33 seat views
Originally premiering on Broadway in 2001, Urinetown enjoyed a successful three-year run until 2004, receiving Tony Awards for Best Book, Best Score and Best Direction. Premiering at St James Theatre in 2014, it opens at the Apollo Theatre in September 2014. Described as a satirical musical comedy, Urinetown is a resonating tale of love, greed, corruption and revolution in a time where water is worth its weight in gold.

Written and conceived by Greg Kotis, Urinetown is set in a dystopian future where a twenty-year drought has crippled the community’s water supplies and private toilets have been banned. All amenities are public and pay-per-use, owned by Urine Good Company, a private corporation run by the evil Caldwell B. Cladwell. Those who choose to go against the rules by relieving themselves in bushes risk being taken away to “Urinetown”, a mysterious place where no one ever returns. Gathering in Public Amenity #9, young rebel Bobby Strong acts as a leader for the poor to rise up and fight the tyrannical regime and make public amenities free once again.

Directed by the Olivier Award-winning Jamie Lloyd (The Commitments), Urinetown features a book by Kotis with music and lyrics by Mark Hollmann and choreography by Ann Yee. The show also features design by Soutra Gilmour and lighting design by Adam Silverman.

Special notice: Fans of Musical Theatre with a twist. Suitable for children over the ages of 10.

Sorry this show closed 10 January 2015, we recommend these similar productions.

SeatPlan Recommends: The Apollo Theatre is fairly intimate and provides good views across the board. Sit in the front of the Stalls for the most immersive experiences.