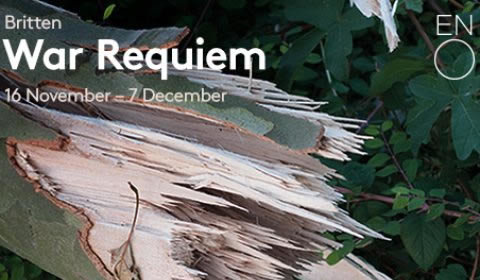 London Coliseum
2 seat views
Coventry Cathedral was reduced to a shell during WWII, with the replacement being built adjacent to the ruins. Completed in 1962, it was opened to much celebration, including a specially commissioned work, War Requiem, by Benjamin Britten. Inspired by the anti-war poetry of Wilfred Owens, who was killed in action in 1918, Britten uses the Latin Mass for the Dead as a backdrop for Owen’s poetry and his opposition to war.

This interpretation of the Requiem Mass is performed by a chorus of 80 adults, a 40-strong children’s choir and the English National Opera orchestra and a chamber orchestra. This concert performance is staged with costume and design, creating a powerful experience that rails against humanity’s ability to disregard the lives of others.

This concert performance promises to be a moving, immersive homage to those who died in battle, and protested the actions of war. The powerfully recognisable music and notable anti-war poems from one of the country’s greatest war poets will be a visceral combination of the best and worst of the human race. Playing for a limited season at the London Coliseum, War Requiem runs in the West End from 16 November to 7 December 2018.

Special notice: Classical music and poetry fans will enjoy seeing their favourite forms used in new and exciting ways. Activists and those with anti-war sentiments will also want to support this piece.

Sorry this show closed 07 December 2018, we recommend these similar productions.

War Requiem - ENO seat view photos show what view you will get for your money. Unfortunately we do not have any seat views for this show.