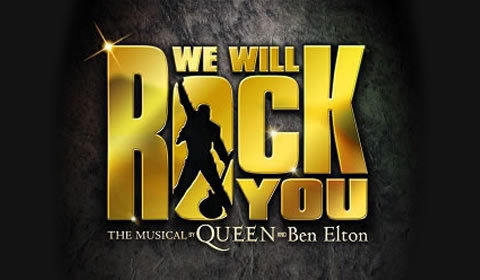 We Will Rock You tickets

Dominion Theatre
15 seat views
Queen’s smash-hit sci-fi musical We Will Rock You remains to be one of the West End’s longest running shows, dazzling London’s Dominion Theatre for an impressive twelve years. Co-created by prolific director Ben Elton and the legendary UK band Queen, We Will Rock You is the most successful jukebox musical to date, wowing audiences internationally.

Opening at the Dominion in 2012, We Will Rock You dominated the 2003 WhatsOnStage Awards, winning Best New Musical, Best Actor in a Musical (Tony Vincent), Best Actress in a Musical (Hannah Jane Fox), Best Supporting Actress in a Musical (Sharon D. Clarke) and Best Director (Christopher Renshaw). Sharon D. Clarke also received the Olivier Award for Best Performance in a Supporting Role in a Musical for her portrayal of the Killer Queen. We Will Rock You also received the Olivier Audience Award for Most Popular Show in 2010 and 2011, proving its immense popularity.

We Will Rock You combines Queen’s greatest hits to create a comic futuristic musical that follows Globalisation in Ga Ga World, where Rock n Roll has been banned for centuries and everybody thinks the same, happy thoughts. Resistance begins to grow amongst the rebel Bohemians, who believe that somewhere on Planet Mall, music and instruments must still exist. Rock God Galileo must escape the hands of the viscous Killer Queen’s Ga Ga Cops, who are looking to consign him to Oblivion across the Seven Seas of Rhye, along with the sassy Scaramouche.

A multitude of well-known actors have featured in the different London casts, including award-winning Sharon D. Clarke as Killer Queen, along with Ricardo Afonso, Noel Sullivan and Oliver Tompsett as Galileo, Hannah Jane Fox, Jenna Lee-James and Lauren Samuels as Scaramouche, Kerry Ellis, Rachel Tucker and Rachel John as Meat and Darren Day as Khashoggi. Including hugely famous Queen numbers such as “Radio Ga Ga”, “I Want to Break Free”, “Somebody to Love”, “Killer Queen”, “A Kind of Magic”, “Who Wants to Live Forever”, “Don’t Stop Me Now”, “Another One Bites the Dust”, “We Will Rock You”, “We are the Champions” and, of course, “Bohemian Rhapsody”, We Will Rock You is the ultimate Rock n Roll experience.

Special notice: Fans of Queen will love this jukebox musical, which has a hilarious storyline combined with a host of Queen’s best-known songs. Children under the age of 5 will not be admitted into the theatre.

Sorry this show closed 31 May 2014, we recommend these similar productions.

SeatPlan Recommends: The Dominion Theatre offers excellent views throughout the auditorium. Sit in the middle of the Stalls for the best overall view of the stage.