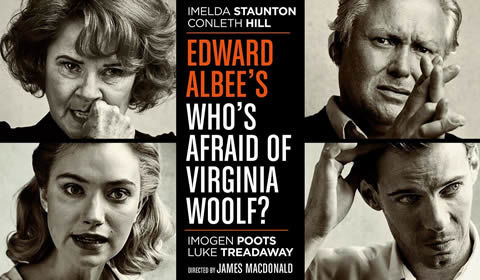 Who's Afraid of Virginia Woolf? tickets

Who’s Afraid of Virginia Woolf? is set on an American college campus during the early hours of the morning, where Martha has invited the newly appointed professor Nick and his wife Honey, back to theirs for some late night drinks, much to her husband George’s dislike.

Throughout the play the alcohol continues to keep flowing and as the dawn begins to break, the young pair are pulled into Martha and George’s poisonous games until the night builds to a peak of shocking truths.

Imelda Staunton stars as Martha. Staunton is a legend of stage and screen, most recently being lauded for her role in the smash-hit West End show Gypsy. She has been nominated for eleven Olivier Awards and won four, including three Best Actress wins for Into The Woods, Sweeney Todd and Gypsy, as well as a Best Supporting Performance win for A Chorus of Disapproval. Staunton has also received great acclaim for her screen roles, including winning a BAFTA Award for Vera Drake, and various other nominations including Nanny McPhee and Return To Cranford.

Staunton is joined by Conleth Hill as George. He is best known for his role as Varys in the hugely popular American TV show Game of Thrones, however is a stage regular in both London and Belfast, having starred in many popular recent productions such as Quartermaine's Terms, The Cherry Orchard and Democracy.

Who’s Afraid of Virginia Woolf was written by the acclaimed American playwright Edward Albee, who’s work also includes A Delicate Balance, The Sandbox and The Zoo Story. When it was first performed in 1963, Who’s Afraid of Virginia Woolf? won both the New York Drama Critics’ Circle Award for Best Play and the Tony Award for Best Play. Shortly after a classic film adaptation was released in 1966, staring Richard Burton and Elizabeth Taylor.

This new version is directed by British director James Macdonald, who is known for his prolific career working with contemporary writers as well as his period as associate and deputy director of The Royal Court from 1992-2006. He has recently worked on Caryl Churchill’s Escaped Alone and Bakkhai at the Almeida Theatre.

Who’s Afraid of Virginia Woolf? arrived in London’s West End at the Harold Pinter Theatre, with performances having began on 22nd February and ran until 27th May.

Special notice: Who’s Afraid of Virginia Woolf? is highly recommended for anyone who has never seen Edward Albee’s great work performed before. With Imelda Staunton leading the cast, it is due to be one of the highlights of 2017. The legendary West End star is known for her unmissable performances and those who saw her most recently in her Olivier Award-winning role in Gypsy should definitely make sure to see her once again in this new show.

Sorry this show closed 02 June 2017, we recommend these similar productions.

SeatPlan Recommends: You can generally find good seats throughout the Stalls in the Harold Pinter Theatre, but two supporting columns in Row M can restrict the view from the various seats behind these. This section is quite flat, meaning that audience members in the rows in front can be a nuisance for shorter theatregoers.

The Dress Circle also has pillars in Row C near seats 6 and 15, and does not always offer the best comfort or leg room. The section is less curved that many theatres however, meaning the ends of the rows are not as restricting. The Royal Circle does have a deeper curve and is quite restricted b safety rails, as is the Balcony. These sections can be distant and cramped, however can also offer good value for money. 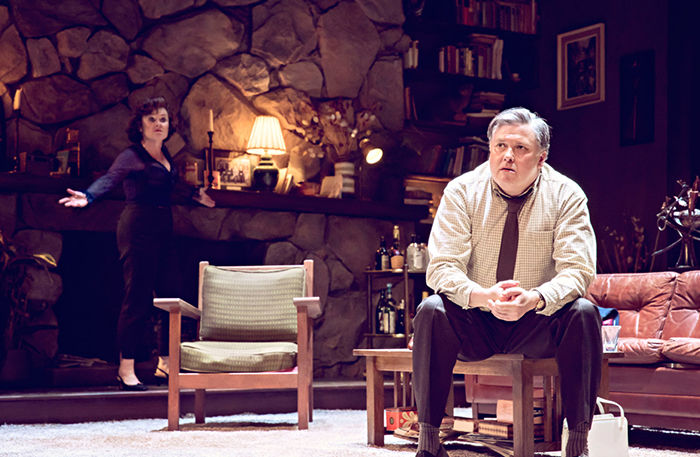 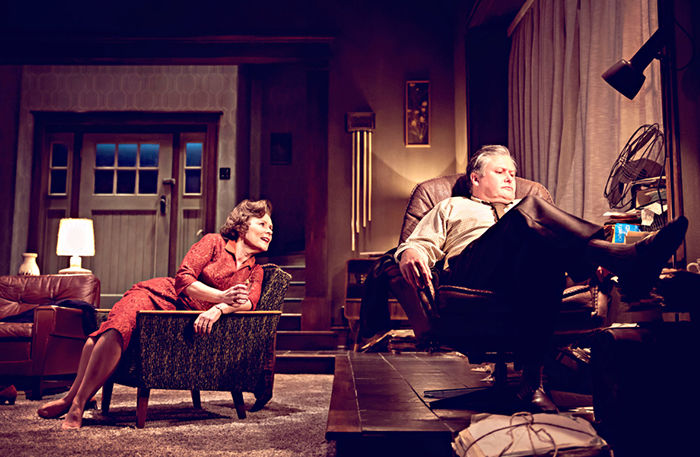 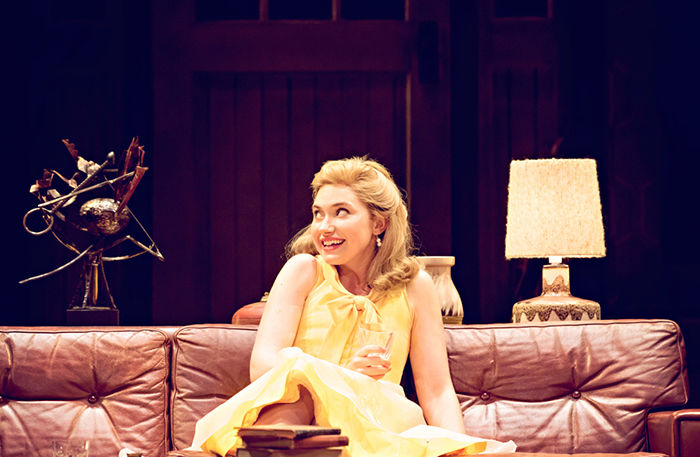 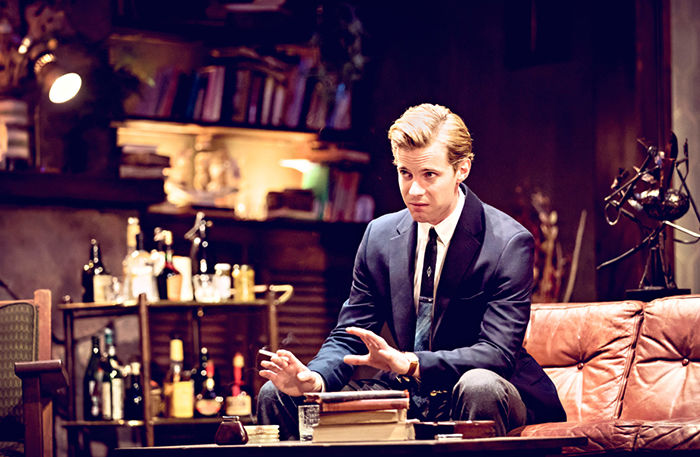 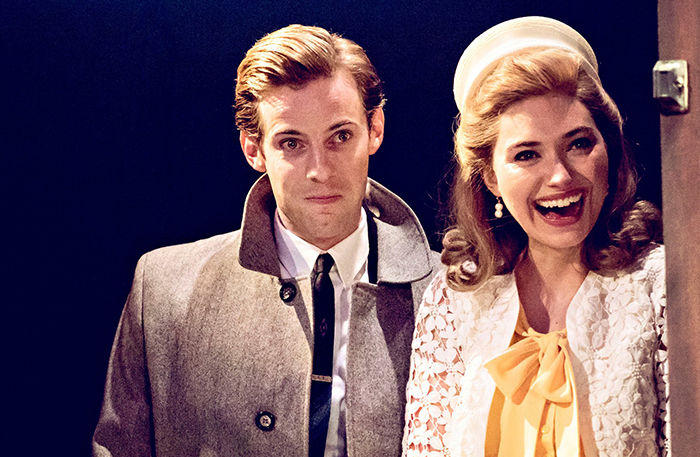 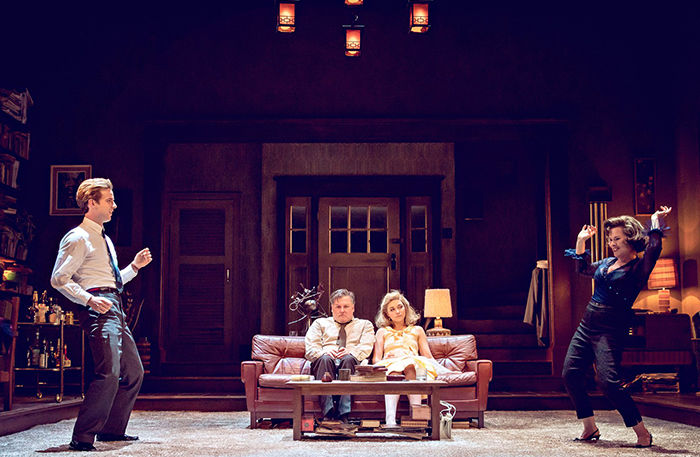 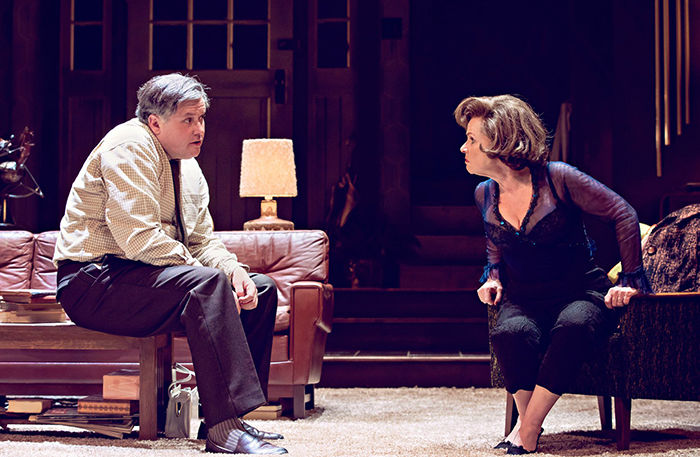