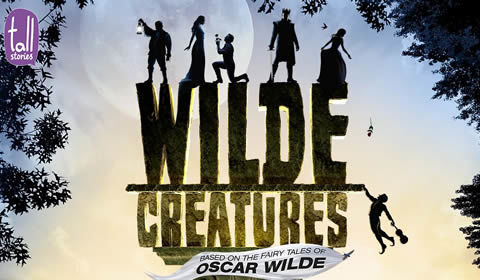 Vaudeville Theatre
1 seat views
Tall Stories, the Olivier award-nominated company who brought us The Gruffalo, are back with an incredible music and storytelling adventure Wilde Creatures based on the works of Oscar Wilde’s classic fairy tales.

For the month of December at the Vaudeville Theatre, Tall Stories invites audiences on a spellbinding journey through the high topped castles, ancient forests and secret hiding spots of Wilde’s remarkable imagination.

Wilde Creatures features a plethora of entrancing tales including The Nightingale and the Rose, The Birthday of the Infanta and The Happy Prince. All these beautiful stories are brought to life by a live band of storytelling musicians.

This production marks Tall Stories’ 20th anniversary, returning to the classic fairy tales of Oscar Wilde, one of the transformative authors who inspired their very first show. Formed in 1997 Tall Stories staged The Happy Prince and Other Stories and Alice and Mr Dodgson to critical acclaim at the Edinburgh Fringe Festival.

Former Artistic Director of Camden People’s Theatre, Olivia Jacobs, directs the piece with Toby Mitchell producing. The pair are the original founding members of the company and have been working with each other on fantastical, immersive family entertainment from its conception.

Since then Tall Tales has gone on to create 28 shows over 20 years. Their unique productions have been performed across the world in 15 countries over 6 continents. The company embark on extensive rural tours and have staged performances everywhere from village halls to Sydney Opera House, Broadway to the West End and back again.

Wilde Creatures plays a limited run at the Vaudeville Theatre between the 15th and 31st December 2017.

Special notice: Whether you’re a fan of Wilde’s imaginative source material or Tall Stories’ magical back catalogue Wilde Creatures looks to be an enchanting end of year treat that all the family will enjoy.

Sorry this show closed 31 December 2017, we recommend these similar productions.

SeatPlan Recommends: The Vaudeville Theatre offers great views anywhere in the stall, audiences looking to make the most of the magical and musical show should aim to be as close to the stage as possible.