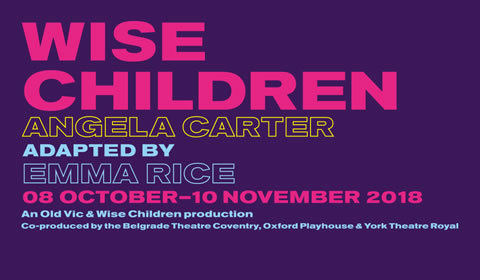 Old Vic Theatre
0 seat views
‘Let’s have all the skeletons out of the closet, today, of all days!’

Emma Rice’s new theatre company Wise Children arrives at The Old Vic to begin a London residency. Opening with an adaptation of Angela Carter’s 1991 novel of the same name, the production is co-produced by Belgrade Theatre Coventry, Oxford Playhouse and York Theatre Royal.

It is 23 April, Shakespeare’s birthday. Twins and ex-showgirls Nora and Dora Chance are celebrating their 70th birthday down in Brixton. Across the river in Chelsea their father, and famed actor, Melchior Hazard is turning 100. His twin, Peregrine, should also be celebrating – that is, if he is still alive.

But as the story weaves on, twists, turns and surprises are all in store as it transpires that Melchior may not be their father after all… With live music, magic, mishaps and plenty of mistaken identity, Wise Children is the exuberant, unique and uplifting show that brings to life themes of theatre, joy, heartbreak and forgiveness in one unforgettable production.

The production also features design by Vicki Mortimer, lighting by Malcolm Rippeth, sound and video design by Simon Baker and compositions by Ian Ross, as well as choreography by Etta Murfitt, puppetry design by Lyndie Wright and animation by Beth Carter and Stuart Mitchell.

Packed full of theatrical treats, Wise Children marks the premiere of a new theatre company dedicated to bringing magical stories to life. The production plays at The Old Vic for a strictly limited season, from 8 October to 10 November 2018, with a press night on 17 October 2018.

Special notice: Those who enjoy Emma Rice’s work, which has spanned across popular theatre company Kneehigh and a stint as the Artistic Director of Shakespeare’s Globe, will be thrilled by her signature style.

Sorry this show closed 10 November 2018, we recommend these similar productions.

Wise Children seat view photos show what view you will get for your money. Unfortunately we do not have any seat views for this show.