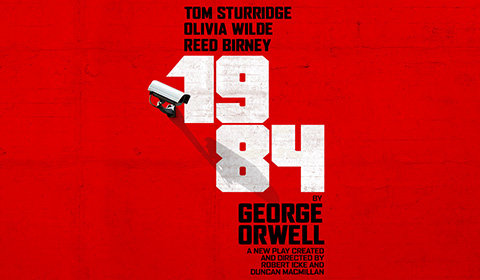 Hudson Theatre
0 seat views
After an incredible four returns to the UK stage, Robert Icke and Duncan Macmillan’s masterful adaptation of 1984 opens on Broadway. George Orwell’s seminal work about a government oppressing its people has enjoyed critical acclaim on UK tour and at London’s Almeida and Playhouse Theatres.

Winston Smith is an employee for the Ministry of Truth, spending his days rewriting newspaper articles – and erasing the truth – to ensure history supports the totalitarian Party. As the omnipresent eye of Big Brother watches over civilians’ every move, Winston faces a chilling truth: he can’t write a letter, fall in love, or question the state without being documented.

1984 was written by George Orwell in 1949 and has become uncannily prescient in its exploration of autocracy, government repression and surveillance.

1984 on Broadway stars Tom Sturridge as Winston. Sturridge previously appeared in Orphans at the Gerald Schoenfeld Theatre, for which he received an Outer Critics Circle Award. He is joined by a cast including Olivia Wilde (in her Broadway debut as Julia), Reed Birney, Wayne Duvall and Carl Hendrick Lewis.

This new stage version is adapted and directed by Robert Icke and Duncan Macmillan, both compelling new talents in the UK. Icke’s credits include a close relationship with London’s Almeida Theatre, where he directed the UK premier of Anne Washburn’s Mr. Burns, and 1984. Macmillan is best known for Lungs and the Olivier Award nominated People, Places and Things.

Charting the dangers of seeking freedom in a state that is built to repress, 1984 at the Hudson Theatre is “an unforgettable jolt of high-voltage theater” (The Huffington Post) that will draw a shiver up your spine.

Special notice: Fans of Orwell’s sharp political predictions will relish this slick adaptation of his work. With some depictions of torture and violence, this show may not be suitable for those under the age of 14.

1984 seat view photos show what view you will get for your money. Unfortunately we do not have any seat views for this show.